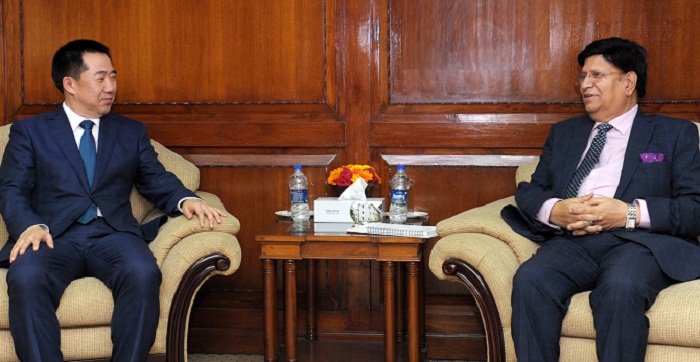 Chinese Ambassador in Dhaka Zhang Zuo on Sunday said China was willing to play a constructive role to repatriate the displaced Rohingyas from Bangladesh to Myanmar.

China will maintain close communication with Bangladesh and Myanmar to find a practical solution of the crisis, he said while paying a courtesy call on Foreign Minister AK Abdul Momen at the foreign ministry in the capital.

During the meeting the Bangladesh foreign minister sought China’s strong support to persuade Myanmar for resolution of the Rohingya crisis.

Chinese Ambassador expressed his commitment to work with the government of Bangladesh to implement decisions reached through consensus between the leaders of China and Bangladesh during President of China Xi Jinping’s visit to Bangladesh in October 2016.

The Chinese envoy showed his keen interest to make deeper engagement with the foreign minister to bring China-Bangladesh bilateral relations to a higher level.

He wished to strengthen practical cooperation between the two countries and accelerate implementation of the projects for common development and prosperity under the “Belt and Road” Initiative.

Ambassador Zhang underlined the importance of the bilateral consultation mechanisms to steer the practical cooperation between the two countries.

The foreign minister emphasized on economic diplomacy and acknowledged the tremendous contribution of China in Bangladesh’s economic development.

Momen expressed gratitude to China for signing 27 Agreements and MOU, worth billions of dollar in investment, during Xi Jinping’s visit to Bangladesh when bilateral relationship was elevated to the stage of “strategic partnership”.

The foreign minister requested the ambassador to take effective measures for speedy implementation of projects funded by China.

Chinese ambassador stated measures taken by Chinese government to reduce the trade gap between Bangladesh and China and increasing the level of Chinese investment in Bangladesh for development of industries.