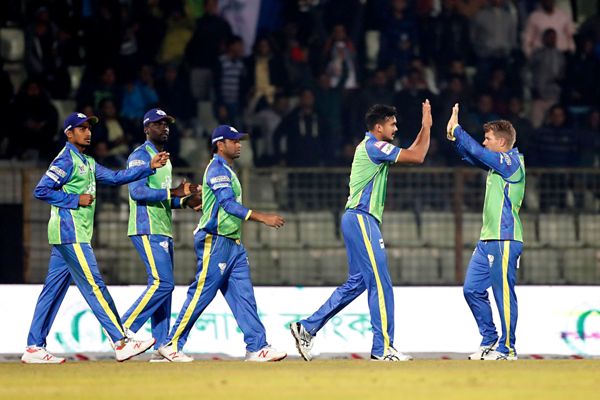 Staging a great comeback from their shocking 8-wicket defeat against Comilla Victorians after being dismissed for only 68 runs on Tuesday, Sylhet Sixers beat defending champions of Bangladesh Premier League (BPL) on Wednesday at their home- Sylhet International Stadium- by 27 runs.

It was Rangpur’s fourth loss in six matches while Sylhet’s second win in five matches.

Rangpur needed 61 runs in the last five overs with Mashrafe Bin Mortaza and Benny Howell in the wicket. But they managed only 33 losing another wicket. Rilee Rossouw was the only batsman to offer some resistance from Rangpur scoring 58, but his effort went in vain as they ended the innings on 160/6 in 20 overs.

The Riders started chasing a challenging total of 187 on a demoralising manner as they lost first three wickets in 13 runs. Mehedi Maruf was the first Riders batsman to fall. He added only three runs. Alex Hales, who got the chance in BPL for third time, failed to impress as he added only seven.

Riders lost both the openers on 11 runs. Chris Gayle went to the middle as number three. He fell for a duck. Mehedi Hasan Rana, the left-arm pacer, took the first two wickets, and Sohail Tanvir trapped Gayle.

After the initial damage, Rilee Rossouw and Mohammad Mithun made an 87-run stand in the fourth wicket. Their counter attack set up a good platform for the Riders to win the match.

However, Taskin Ahmed removed both of them to steer Sylhet to the hard-fought win. The right-arm pacer took two wickets conceding 34 runs. Mehedi Hasan also bagged two wickets for 40 runs.

Earlier, Sylhet Sixers posted a challenging total of 187/5 which was their highest total in the ongoing BPL. Liton Das and David Warner hit fifties for the Sixers.

Rangpur won the toss and opted to bowl first. Sylhet started the innings with Sabbir Rahman and Liton Das. They added 73 runs in the first wicket stand. Sabbir fell as the first batsman scoring 20 off 20 balls. But Liton hit his best innings of the season.

Liton Das reached fifty off 29 balls and ended the innings at 70 off 43 balls with nine fours and one six. He had the chance to score first century of BPL’s running season. But he fell prey to run-out. Benny Howell and Chris Gayle were the fielders.

In the second wicket stand, Liton and Warner added 56 runs on the board. After Liton’s dismissal, Warner kept the score afloat. He also hit a half-century off 33 balls. Warner remained unbeaten on 61 off 36 balls.

Rangpur will take on Sylhet Sixers again in their next match on 19 January. Before that match, Sylhet will face off Dhaka Dynamites on 18 January at Sylhet International Stadium on 18 January.