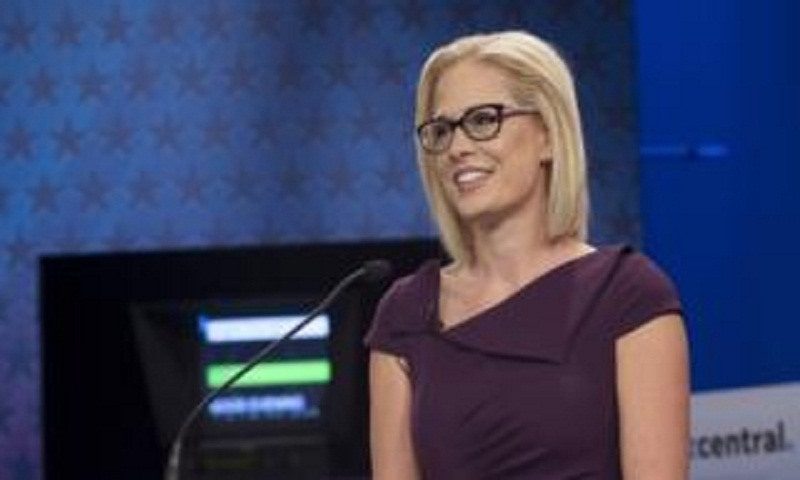 Democrat Kyrsten Sinema has won a tight Senate race in the US state of Arizona, beating Republican Martha McSally.

Two other Senate races remain unresolved. A run-off election will be held later this month in Mississippi.

In Florida, unofficial results were within a margin of 0.5%, and a recount was ordered by law.

What happened in Arizona?

With almost all the votes counted, Ms Sinema had a lead of 1.7% of her rival. She now becomes Arizona's first female senator.

She paid tribute to the memory of the late John McCain, who represented Arizona in the Senate, saying he had set a shining example of how to put national interests above party political ones.

In a video message posted on Twitter, she said: "I just called Kyrsten Sinema and congratulated her on becoming Arizona's first female senator after a hard-fought battle."

Which other races are still undecided?

Votes are being recounted in the Florida senate race, which pits incumbent Democrat Bill Nelson against the state's Republican Governor Rick Scott.

Florida Secretary of State Ken Detzner has ordered that all 67 of the state's counties complete machine recounts for the Senate by 15:00 local time (20:00 GMT) on Thursday.

In Georgia's gubernatorial election, Democrat Stacey Abrams is refusing to concede in her race against Republican Brian Kemp.

Mr Kemp declared victory on Wednesday with a narrow lead but campaign officials for Ms Abrams have started a legal challenge to ensure all votes are counted.

Her supporters have claimed that issues such as ballot machines supplied without power cables and four-hour queues unfairly helped Mr Kemp.

An ongoing tally has whittled Mr Kemp's lead slightly to under 60,000 votes, the Atlanta Journal-Constitution reported on Sunday.

But Ms Abrams still needs another 22,000 votes to trigger a run-off election next month, and it is unclear how many ballots remain outstanding.

Meanwhile, in Mississippi, Republican Cindy Hyde-Smith faces Democrat Mike Espy in a run-off vote after neither managed to reach 50% in the first round, winning 41.5% and 40.6% respectively.

The vote will take place on 27 November.