Prime Minister Hasina for continuation of progress in sports arena 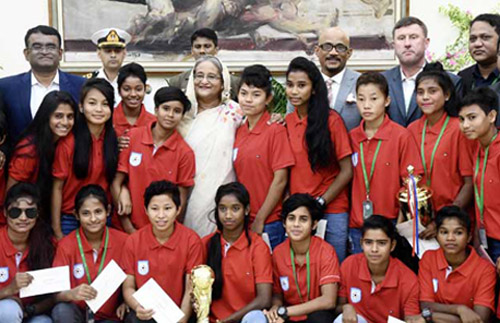 Prime Minister Sheikh Hasina on Thursday put emphasis on continuation of the ongoing progress in the field of country's sports to brighten Bangladesh image in the international arena.

"The sports and games help project the country in the international arena," she said while addressing a reception accorded to the players of Bangladesh Under-16 Women Football Team for becoming the Group F champion in the recently held AFC Under-16 Women's Championship.

The reception was held at the Prime Minister's official residence Ganobhaban in the city.

The Bangladesh Under-16 Women Football Team became the group champion beating Vietnam by 2-0 goals in the AFC Under-16 Women's Championship in Dhaka on September 23 last.

The Prime Minister assured of providing all possible support and cooperation to further flourish the country's sports sector.

Stressing the importance of engaging children in sports and cultural activities alongside their academic studies, she said the extracurricular activities help them be disciplined. "Besides, such activities play a significant role in ensuring their physical and mental growth," she said.

Sheikh Hasina said steps were taken during the first tenure of her government in 1996 to arrange football tournaments for female players, but there were lot of hurdles and obstacles during that time.

Since then, she said, she vowed to bring a change to people's mentality about women sports and games, particularly participation of women in football. "The arrangement of various tournaments like Bangamata football tournament during the last 10 years played a significant role in changing this attitude. As a result, Bangladesh's female team earned lot of successes in regional and international competitions in both football and cricket," she said, adding that the success of the under-16 girls is the outcome of such efforts.

The Prime Minister recalled the contribution of Abahani founder Sheikh Kamal to the sports and games, saying he was also the introducer of modern football in Bangladesh.

She said Bangladesh marched forward in many fronts during the last 10 years due to various steps taken by her government. "The present government has been working to ensure improved living standard and better future for all."

Sheikh Hasina expressed the hope that many more girls will be inspired in games and sports witnessing the successes of the female players like Bangladesh Under -16 Female Football Team.

Later, the Prime Minister handed over prizes and gifts among the under-16 girls.