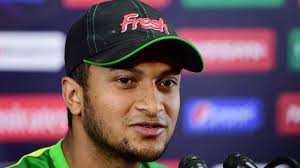 The Bangladesh Cricket Board (BCB) on Thursday announced a 15-member final squad of Bangladesh national cricket team including Shakib Al Hasan for the ACC Asia Cup 2018 beginning in the United Arab Emirates on September 15.

World famed all-rounder Shakib Al Hasan met with BCB President Nazmul Hasan today after performing Hajj and agreed to play in the Asia Cup. He will undergo a finger surgery after the Asia Cup.

Bangladesh, which was placed in Group B with Sri Lanka and Afghanistan, will play Sri Lanka in the inaugural match on Sept 15 in Dubai and will face Afghanistan on Sept 20 in Abu Dhabi.

Pacer Mashrafe Bin Mortaza will lead the Bangladesh team in the continental cricket meet while world famed all-rounder Shakib Al Hasan retained as the vice-captain of the team.