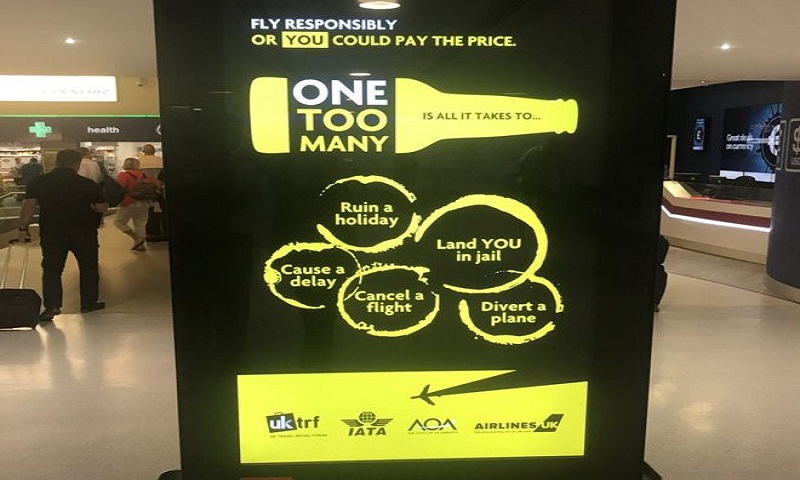 Holidaymakers have been warned their getaways could be ruined if they drink too much at airports or on flights.

The travel industry unveiled its One Too Many campaign on social media and displays at 10 UK airports, including Gatwick and Manchester, ahead of what is often their busiest weekend.

Passengers are being reminded they could be denied boarding, and face fines or jail for serious incidents.

The government has also indicated that restrictions on the sale of alcohol at airports could be introduced amid reports that disruptive incidents on flights "more often than not" involved passengers who had had alcohol before boarding.

The new campaign from the UK Travel Retail Forum, the Airports Operators Association, the International Air Transport Association and Airlines UK tells travellers to "Fly responsibly or you could pay the price".

Passengers arrested for disrupting a flight can be jailed for up to two years and fined £5,000. They could also face an airline ban and be liable for a fee of up to £80,000 if they cause a flight to be diverted.

Rafael Schvartzman from the IATA, said: "While we should remember that disruptive passenger incidents are still relatively rare.

"Airlines have a zero-tolerance approach to unruly behaviour and cabin crew and passengers have a right to a flight free from disturbance and harassment."

Aviation Minister Baroness Sugg, said: "Disruptive passengers have the potential to ruin other people's flights, and this campaign is an important new step to ensure all passengers are aware of the consequences they face if they behave disruptively after drinking before or on board a flight."