Are France - and Deschamps - about to repeat history? 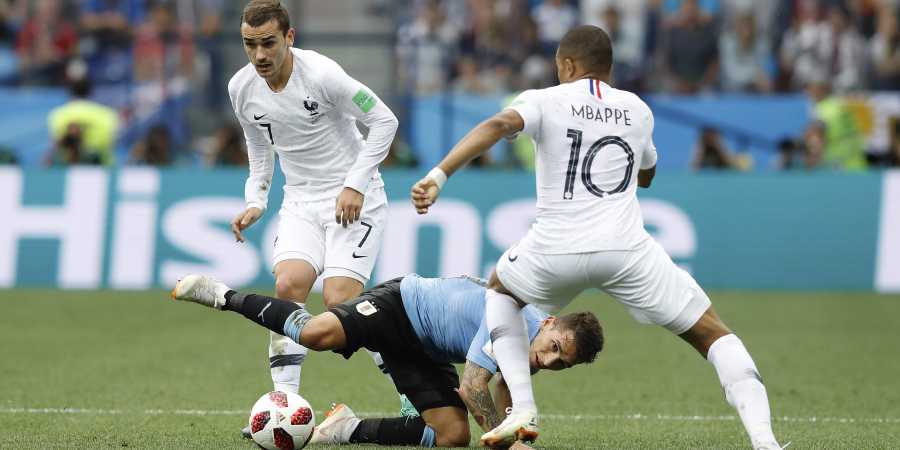 It was just 20 days before France's comprehensive quarter-final victory over Uruguay that Les Bleus took to the field to begin their 2018 World Cup campaign against Australia.

Ninety largely forgettable minutes followed, unless you count the VAR incidents, and France scraped home 2-1 against a rank outsider.

France's goals came via the penalty spot and an Aziz Behich own goal.

Insipid and uninspiring, those analysts who had pointed to France as potential world champions before a ball had been kicked were probably keeping quiet that day.

An uninspiring 1-0 win against Peru followed and then came the convenient 0-0 draw with Denmark.

France had been "boring" in qualifying for the knockout stage, critics said.

They were quickly moving from a team tipped as genuine title winners to also-rans.

How that has changed in less than a week.

Following a thrilling 4-3 win over Argentina in probably the match of the tournament, which introduced the rest of the world to wunderkind Kylian Mbappe, through to their comprehensive dismantling of street-tough Uruguay on Friday, France are now into a semi-final against Belgium.

The big question is, can France go all the way?

It was a question Didier Deschamps was asked after the Uruguay win.

"All I can say at the moment is that we have the potential to be in the semi-finals," said Deschamps, coyly.

"We played well but it was not the perfect match. There are so many things that we can improve on."

No doubt that is true but it is also clear that France are doing what other successful teams at the World Cup have done, namely get stronger with each game and against progressively better opponents.

Asked to make the step up in class that each round of the World Cup requires, France have not been found wanting.

They have "momentum", a curious intangible concept, which nevertheless has been ascribed to several teams whose faltering start has given way to a rousing finish.

There are plenty of examples in World Cup history from which France and their supporters can draw parallels from.

Probably the best is Italy in 1982, who drew 0-0 with Poland, 1-1 with Peru and 1-1 with debutants Cameroon to scrape through to the next round without a victory and on goal difference from the Africans.

The apoplectic Italian press was so critical of Italy's performances that coach Enzo Bearzot refused to talk to the media.

Then drawn into a group containing Argentina and champions-elect Brazil, Italy exploded into life, winning both games, including the legendary 3-2 win over the Brazilians, thanks to a Paolo Rossi hat trick.

They beat Poland again, then West Germany to lift the World Cup.

But France -- and Deschamps -- are probably more likely to point to their 1998 World Cup win as the more relevant historical parallel.

Inspired by Zinedine Zidane, France glided through the group stage at the World Cup they were hosting, but they were resolute rather than impressive.

A last-16 extra-time win over Paraguay did nothing to convince the doubters, nor a quarter-final win on penalties over Italy.

In the semi-final, France conceded first against Croatia, then Lilian Thuram memorably scored the only two goals of his international career to send an unconvincing France into the final.

In their next 90 minutes, Deschamps skippered the team to its most golden victory and eternal fame.