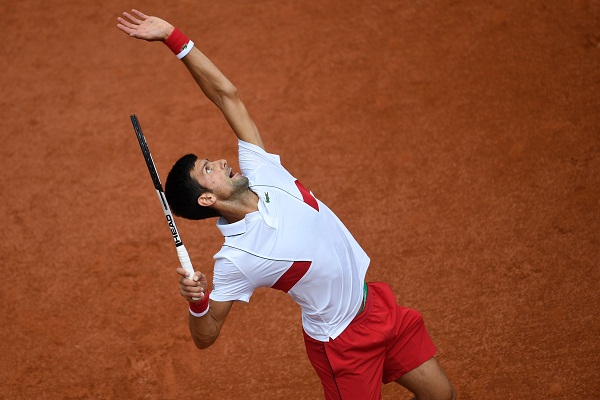 Djokovic, the 2016 Roland Garros champion and former world number one, is seeded 20 this year after struggling to rediscover his best form after returning from a right elbow injury.

He wasn't at his best on Court Suzanne Lenglen, but goes on to face Spain's 13th seed Roberto Bautista Agut for a place in the last 16.

The Serbian 12-time Grand Slam champion fired 39 winners but 33 unforced errors and was broken three times by Munar, the world 155.

"I am very happy to be here on Suzanne Lenglen and see so many people and see the support," said Djokovic.

"Jaume is a great player, he has lots of quality and good concentration. I congratulate him on a great match today."

German world number three Zverev found himself in deep trouble when trailing by two sets to one against Lajovic, but the Serbian ran out of gas as it finished 2-6, 7-5, 4-6, 6-1, 6-2.

The 21-year-old, a winner of three Masters titles, is yet to reach a Grand Slam quarter-final and was knocked out in the first round at Roland Garros last year.

But Zverev moved into round three for the second time, where he will play Bosnian 26th seed Damir Dzumhur, as he looks to become the first German man to win the title since 1937.

The Bulgarian was pushed all the way by world number 57 Donaldson in a match that lasted four hours and 19 minutes, but grabbed the crucial break in the 17th game of the deciding set as his opponent started to struggle with cramp.

Seventh seed Dominic Thiem, a semi-finalist in each of the last two years, grabbed the third set against Greek teenager Stefanos Tsitsipas to lead 6-2, 2-6, 6-4 when darkness fell, with the pair to finish the match on Thursday.

World number one Halep fought back after a disastrous opening set to beat American Alison Riske 2-6, 6-1, 6-1 in their delayed first-round match.

The Romanian committed 16 unforced errors in the set but stepped up a gear from that point on to book a second-round match against Taylor Townsend of the United States.

"It's always difficult in the first round of a Grand Slam, you are always nervous," said 26-year-old Halep after a match that was pushed back from Tuesday due to rain.

Halep needs to reach the semi-finals or better if she is to retain the world top spot.

Her main rival for the top ranking, second seed Caroline Wozniacki, joined her in the last 32 by thrashing Spanish qualifier Georgina Garcia Perez 6-1, 6-0 in only 51 minutes.

Eighth seed Petra Kvitova eased into the third round with a 6-0, 6-4 victory over Spain's Lara Arruabarrena on Court One.

The two-time Wimbledon champion has now won 13 consecutive matches on clay after claiming titles in Prague and Madrid, and will face Estonia's 25th seed Anett Kontaveit for a place in the last 16.

The 23-year-old, who arrived in Paris having won her second straight Italian Open title, saw off her Slovakian opponent 6-3, 6-4 and will next take on Romanian 31st seed Mihaela Buzarnescu.

Serena Williams, who made her Grand Slam return with a singles win on Tuesday, partnered sister Venus in a 4-6, 6-4, 6-1 doubles victory over Japan's Shuko Aoyama and Miyu Kato.