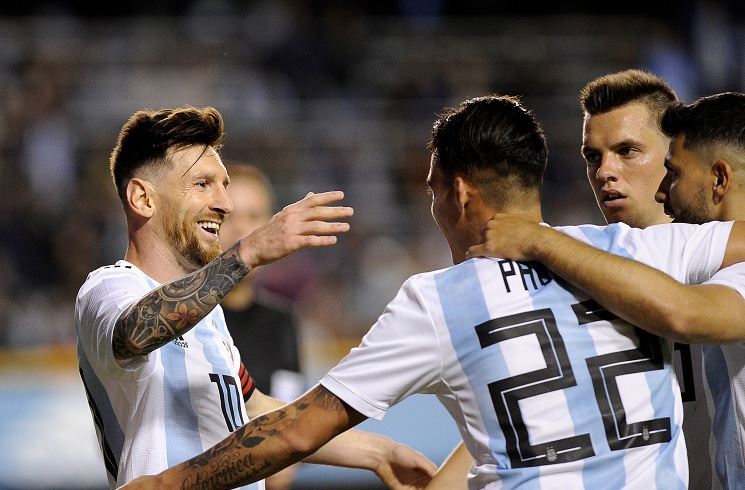 Lionel Messi was the star of the show tonight, bagging a hat-trick and an assist as Argentina cruised to a 4-0 win over Haiti in an international friendly that served as their World Cup send-off at La Bombanera.

Around 55,000 fans crammed into the home of Boca Juniors for the first of two warm up matches ahead of the World Cup, which begins in just over two weeks in Russia. Fans were eager to see the Barcelona star forward, chanting Messi's name repeatedly as he and his teammates took to the field.

The Albiceleste went in at half time with a 1-0 lead after a poor first half, which saw striker Gonzalo Higuaín miss a couple of chances. The goal was inevitably scored by Messi, who put a penalty away in the 17th minute after an exceptionally poor tackle on Giovani Lo Celso saw the Paris St. Germain midfielder hacked down in the box.

In the second half Argentina cruised with three goals in 10 minutes. Messi scored again in the 58th minute with a well-controlled finish after a Lo Celso header was saved. In the 66th minute he completed his hat-trick to the crowd's delight, scoring with a low shot from point-blank range.

The goal now means that Messi has scored 64 goals for the national team – a new record.

The second half also saw good performances from Boca midfielder Cristian Pavón, after Ángel Di Mariía was replaced. Manchester City striker Sergio Agüero also entered the field, a sign that he is recovering from the injury that saw him miss a series of club matches at the end of the Premier League season.

In the 68th minute, Agüero showed that he hadn't lost his scoring touch, holding off a challenge easily after a Messi through-ball and slotting home with an efficient finish.

The result, while coming against a poor side, will give Argentina confidence ahead of next week's clash against Israel in Jerusalem. The June 9 match will be the Selección's last tune-up opportunity ahead of the World Cup.

Argentina's first match is against Iceland, in Moscow, on June 16.

Interviewed on the pitch after the game, Messi paid tribute to the fans who attended the game.

"I am very grateful to all the people, we always feel their affection," he told reporters.

Asked about the team's chances in Russia, Messi said the World Cup "is our dream, the country's dream."

He stressed the importance of a good start would be crucial to the team's chances of progression.

"We have to win the first game, that will give us the peace of mind to face the remaining two," he said.

"We will do everything we can" in Russia, he added.