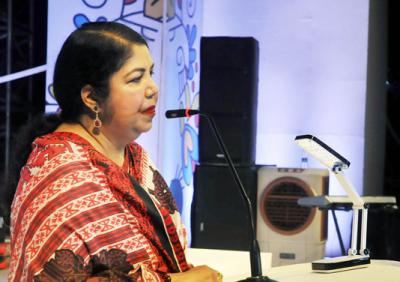 "Pahela Baishakh is a vibrant festival of our Bangali culture. We will go ahead with new enthusiasm through the festival giving farewell to the last year," she said while addressing the inaugural function of "Alponay Bangladesh", a street painting stretching across Manik Miah Avenue to welcome the Pahela Baishakh-1425.

Dr Chaudhury said this year's Pahela Baishakh is very important to the Bangali nation as the country has reached to a new height with the eligibility for graduation from the Least Developed Countries (LDCs).

"It should be our pledge on this Pahela Baishakh that we should work for improving the living standard of all people of the country," she added.

Managing Director of Berger Paints Rupali Chowdhury, Iresh Zaker and eminent artist Moniruzzaman also spoke at the function, among others.

Later, a cultural function was held at the same venue.