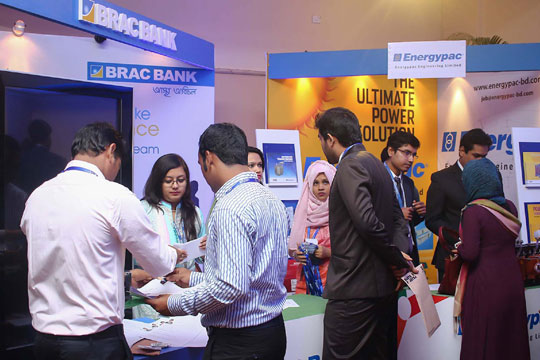 Seeing the euphoria among some sections in politics and the media over Bangladesh’s graduation to a developing country, a large number of educated youth who are running from pillar to post for a job are seen getting curious and asking “how are we going to benefit from this new label stuck on the country?” “Will we find more employment opportunities?”

According to an estimate of Bangladesh Bureau of Statistics (BBS), as many as four lakh youths with university degrees are now unemployed and desperate for jobs. Almost every day they are taking to the streets braving unkind police action, while some are protesting against the quota system and some others demanding age-limit for government jobs be raised to 35 years.

Very recently hundreds of young graduates were seen sweeping the streets in Dhaka, Chittagong and Rajshahi while hanging their academic certificates on their necks.

The youths of a country are the driving force of its hopes and aspirations. Their active participation in workforce is crucial to fulfil our quest for becoming a developed country. But surprisingly, even though we are manoeuvring to uplift our economic status, we are indifferent to their cause.

With the gradual expansion of education opportunities, the number of educated youth is rising exponentially. But after graduation many educated youths don’t find a job or don’t have the kind of jobs they deserve or are capable of. Their parents spent their life savings educating their offspring and yet there is no end to their miseries.

As per the latest data of the Bangladesh Bureau of Statistics, in the last one year the number of jobless people went up by one lakh. In 2015-16 the total figure of unemployed individuals stood at around 26 lakh but it rose to around 27 lakh in the following year. Although the national average unemployment rate is 4.2 per cent, the rate is 2.7 per cent among those who studied up to primary level and 11.2 per cent among those who graduated from universities. Which means the more you are educated, the higher is the chance for you of remaining unemployed.

This is not that there are no new job openings. As many as 13 lakh job-seekers found employment last year, while 10 lakh went abroad, according to the BBS report. But compared to the uneducated and half-educated, educated youths are finding fewer job openings. Literally, they are caught up in an awkward situation as neither they find a suitable job nor can take up odd jobs. As a result, graduate unemployment rate is increasing. It also signifies that our labour market, especially that of the formal sector, is not robust enough to cater to the number of graduates our universities and colleges are churning out each year. According to an estimate, 85 per cent of our labour market belongs to informal sectors where mostly children and women are recruited.

So what is the remedy of this colossal wastage of merit and youth? The simple answer is investment and economic development. If we cannot grow as a robust economy, we will not be able to provide enough jobs for youth. On the other hand, if we cannot put our youth on the right track, the economy will not grow at the desired pace. So, a lot of things depend on managing the economy better and harnessing youth potential.

Now as the country elevates from lower middle income country status to the developing country one, it certainly does generate hopes. Some of the primary advantages of becoming a developing country are: It will offer benefits of credit worthiness and more potential for foreign investment, which will pave the way for more job creation.

But to make that happen we must strive for offering more investment friendly environment. We have to improve infrastructure network and port facility services. Build a number of deep sea ports by 2021. Then there is the question of meeting energy demands, cutting red tape to make ‘one-stop service’ effective, maintaining law and order and keeping political environment calm and peaceful. Fulfilling these requirements is a must to attract more investment both internal and foreign.

At the same time, we have to diversify export basket and market to reduce dependence on a single sector – garments which accounts for 80 per cent foreign earnings. In order to accelerate economic growth and job creation, at least 4-5 sectors need to be strengthened. There are a number of highly potential sectors such as jute, agro-processing, leather, ICT and tourism. Once these sectors flourish, educated youths will find more employment opportunities.

In the end, the students and their parents must remember that university degrees no longer guarantee a decent job. Skill development is the key. It is a matter of irony that when so many of our educated youths are left unemployed, foreign nationals working in Bangladesh are taking home around USD five billion a year, due to lack of skilled human resource in the country. The situation calls for the universities to analyse the ever changing demands of the market and educate and prepare professionals accordingly.