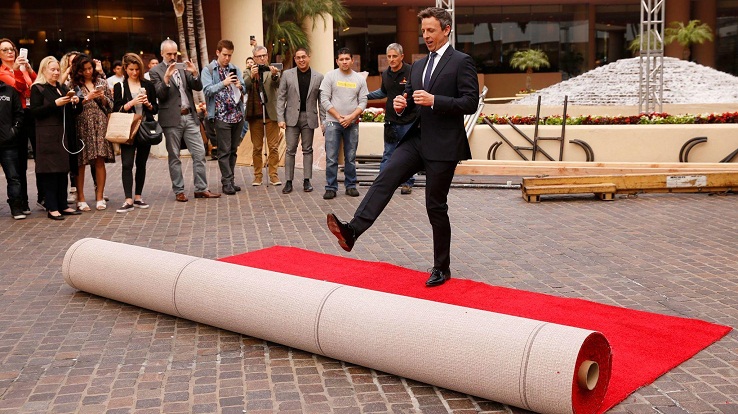 Hollywood's elite head for the red carpet Sunday for the Golden Globes, the glitzy launch of the entertainment industry's awards season, with sexual harassment scandals casting a long shadow over celebrations.

Billed as the most raucous event in the showbiz calendar, the champagne-drenched Hollywood Foreign Press Association's annual prize-giving is a draw for filmmakers and actors looking to create some buzz ahead of March's Academy Awards.

But this year's ceremony, seen as the first big opportunity for the industry to unite against a pervasive culture of sexual misconduct brought to light by the downfall of disgraced Hollywood mogul Harvey Weinstein, may strike a more sombre tone.

"The deluge of sexual misconduct revelations has been the story of the year, so it's safe to predict that it will be the story of the night at the Golden Globes," Debra Birnbaum, executive editor for television at industry weekly Variety, told AFP.

"It will influence everything from Seth Meyers' monologue to impassioned acceptance speeches to the fashion."

The ceremony at the Beverly Hilton -- the first for late night NBC funnyman Meyers as host -- is not as reliable at predicting Oscars glory as the galas held by Hollywood's acting, producing and directing unions.

But it remains one of the most high-profile and glamorous events of the awards calendar and tends to generate more headlines for tipsy tributes, daring gowns and wacky tuxedos.

Actors and actresses are however expected to turn out in black this year, in solidarity with victims of Weinstein and numerous other figures exposed by the harassment and abuse scandal, including Kevin Spacey, Brett Ratner and Dustin Hoffman.

The directors of the best foreign film entries were asked at a Q&A in Hollywood on Saturday if even attending the Globes could be taken as a sign of tolerance for the film industry's misogynistic culture.

"We have many things that have to be dealt with in the world," said Angelina Jolie, who made the Cambodian entry, "First They Killed my Father."

"The issues are very big and very serious. We have a lot of work to do."

Leading the pack this year is Guillermo del Toro's fantasy romance "The Shape of Water" with seven nominations, while "The Post" and "Three Billboards Outside Ebbing, Missouri" are tied for second, with six each.

Overall, 25 awards are given out -- 14 for movies and 11 for TV -- and, as usual, the 90-member HFPA has sprung more than a few surprises in the nominations, placing horror satire "Get Out" in the best comedy-musical category.

While many fields are wide open, James Franco ("The Disaster Artist") is almost certain to win best actor in a musical/comedy movie, according to awards prediction website Gold Derby, ahead of Daniel Kaluuya ("Get Out").

The site expects Saoirse Ronan ("Lady Bird") to pip Margot Robbie ("I, Tonya") in the parallel race for best actresses for her acclaimed performance as a troubled teen.

On the small-screen, HBO's "Big Little Lies" leads with six nominations, followed by FX's "Feud: Bette and Joan," with four, and "The Handmaid's Tale," "Fargo," and "This Is Us" all picking up three nods apiece.

Gold Derby's Amanda Spears speculated that the harassment scandal could boost "Big Little Lies" star Shailene Woodley in the race for best supporting TV actress for her Emmy-nominated performance as a single mother raising a child conceived by rape.