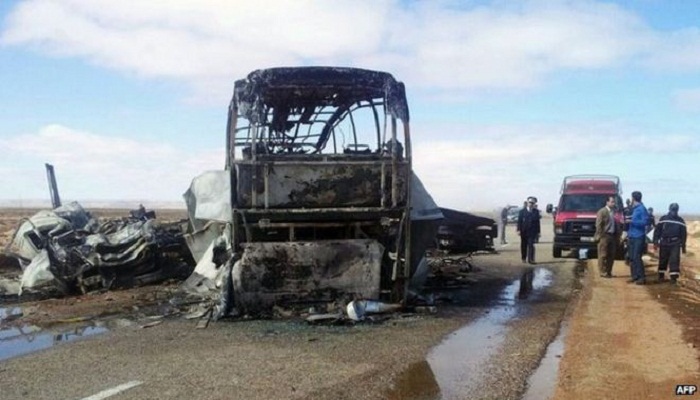 Schoolchildren returning from a sports competition were among at least 33 people killed in a head-on collision between a bus and a gas tanker in southern Morocco, officials say.
The bus burst into flames after the crash on Friday morning near the city of Tan-Tan in the district of Chbika.
Nine people were injured and taken to hospital but two later died.
Local media said the children had been taking part in an athletics competition and were travelling with their coaches.
One survivor said, "We were sleeping, most of us were sleeping. We heard the explosion, followed by the burning."
Some reports said they were travelling from the capital, Rabat, to Laayoune, which is in the Western Sahara.
"A majority of the victims are children aged eight to 14," an official from the regional sports and youth ministry told the AFP news agency.
Hassan Issengar, a well-known athlete, was travelling with the children and is among the dead, reports said.
King Mohamed VI has sent a message of condolences to the families and said he would pay for the burials as well the hospital fees for the injured.
Road accidents have been on the rise in Morocco as car ownership has nearly doubled over the past 15 years, according to Reuters news agency.
An average of 10 people are estimated to die every day in road accidents.