One killed as huge tornado tears through Illinois 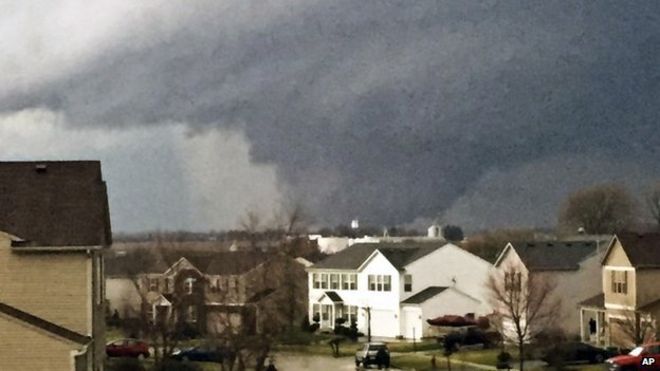 A severe tornado has killed one person and injured seven more in a small town in northern Illinois in the US.
Fire officials told local media the victim was a 67-year-old woman.
Most of the 50 structures in Fairdale were flattened and all were damaged, the fire department said.
More than 850 flights were cancelled at Chicago's O'Hare airport as a severe weather system tore through parts of Iowa, Illinois and Ohio on Thursday.
Roger Scott, Sheriff off DeKalb County, said that approximately 15 to 20 homes in Fairdale were completely destroyed.
The Rockford Fire Department, which serves Fairdale, said they were having trouble accessing affected areas because of the amount of debris on the roads.
America's National Weather Service said on Thursday night that a tornado had touched ground in the Illinois city of Rochelle, near Fairdale, and urged residents to take shelter.
It warned on Friday that severe storms would continue to develop in northern Illinois through the afternoon, as well as in Missouri and Iowa.