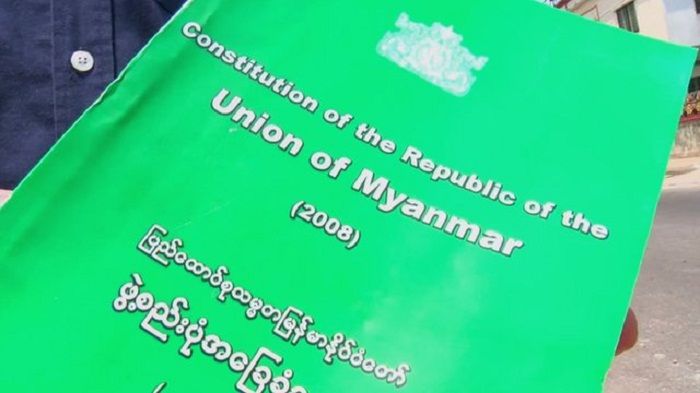 Jonah Fisher explains Myanmar's constitution and the battle for control

NAY PYI TAW: Myanmar President Thein Sein and opposition leader Aung San Suu Kyi are holding rare talks on the constitution and elections.
The discussion is being held in the capital Nay Pyi Taw and also includes the head of the military.
The military-drafted constitution currently does not allow Suu Kyi to run for president.
She has said the talks will only be meaningful if they lead to free and fair elections, due later this year.
The Nobel Peace Prize winner refused to rule out boycotting the elections when addressing reporters on Thursday, saying: "We keep our cards close to our chests until such time as we need to show them."
The talks follow months of pressure and a motion in parliament to ensure they took place.
Six leaders are involved in Friday's meeting. Besides Thein Sein and Aung San Suu Kyi, top military commander Snr Gen Min Aung Hlaing, the speaker and the president of both houses of parliament, and a representative of ethnic minorities, Aye Maung, are attending.
Friday's meeting came after a preliminary discussion on Wednesday involving a wider range of participants from political parties and the military.
The BBC's Myanmar correspondent Jonah Fisher says the talks are the last throw of the dice for Suu Kyi in her efforts to change the constitution before November's general election.
The constitution effectively bans her from running for the presidency as it rules out anyone with relatives who are foreign citizens. Suu Kyi's children are British citizens.
Our correspondent says her pleas are almost certain to fall on deaf ears, and her vague threats about a possible election boycott likely to be ignored, as neither the president or the military's commander-in-chief seem to want to help her out.
But if her National League for Democracy party wins the elections, most people expect she would then have a mandate to push again for changes to the constitution.
Myanmar, also known as Burma, moved from military to civilian rule in 2010 and is governed by a military-backed civilian administration.
Under Thein Sein, many political prisoners have been freed and media restrictions eased. The pro-democracy party of Suu Kyi, who spent years under house arrest, has rejoined the political fold and holds a small bloc of seats in parliament. She was elected to parliament in 2012.
But concerns have been expressed that the government may be backsliding, and Suu Kyi has said that the reform process has stalled.