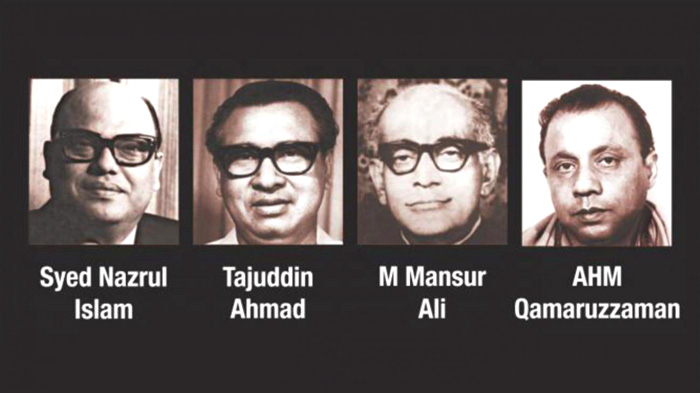 The nation on Friday observes the Jail Killing Day commemorating the assassinations of four national leaders, who were brutally murdered inside the Dhaka Central Jail on this day in 1975.

The day is remembered as one of the most tragic events in the history of the country, which emerged as an independent state in 1971 after a long bloody struggle against Pakistan.

The ruling Awami League, its front organisations and several socio-cultural organisations have chalked up various programmes to mark the day.

The four leaders played a vital role in forming the country’s first government, which led the war of independence in 1971.

Tajuddin, who took the main initiative, was the prime minister of the Mujibnagar government while Syed Nazrul Islam was the acting president, Mansur Ali was the finance minister and AHM Qamaruzzaman was the minister of home, relief and rehabilitation affairs.

The former Dhaka Central Jail has been shifted to Keraniganj, an outskirt of the capital. The cells of the jail, where the leaders were killed, have been turned into museums and their belongings have been preserved there.

Besides the cells, murals of the four leaders were set up on the jail premises.

They paid rich tributes to the national leaders for their contributions during the nation’s movements for democracy and war of independence.

The AL will begin the day by hoisting the national flag and party flag at half-mast at its central and district offices across the country at 6:00am.

Party leaders will also place wreaths at the portrait of Bangabandhu Sheikh Mujibur Rahman at Bangabandhu Memorial Museum at 7:00am.

They will also place wreaths at the graves of Syed Nazrul, Tajuddin and Mansur Ali at Banani in the capital at 8:00am while wreaths will be placed at Qamaruzzaman’s grave in the northern city of Rajshahi.

The party will also hold a discussion programme at Krishibid Institution auditorium at 3:00pm.

Prime minister Sheikh Hasina is expected to chair the programme.

AL general secretary Obaidul Quader urged all the leaders and activists to observe the day in a befitting manner.