Menstruation: how to break this taboo in the classroom 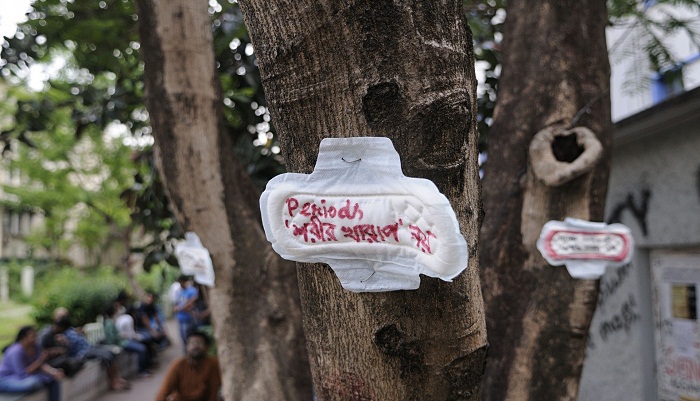 A sanitary towel protest in Kolkata, India: the message reads ‘menstruation is not an illness’. Photograph: Arindam Shivaani/NurPhoto/Rex

I don’t know about you, but I’m totally absorbed. I can barely contain myself. From Instagram’s double standards to taboo breaking in sport, frank talk about hormones, archaic tax laws, advocacy for homeless women, and the most innovative street art yet, there’s been an absolute deluge of menstruation in the media lately. (I make no apologies for these puns. Brace yourselves for more.) But is this it? Have we crested the wave? Have we reached saturation point? Should we consider this peak flow? Not yet. Not quite.
These stories are just a drop in the bucket. We need this kind of attitude to spread, and we can do it by sorting out menstruation education – in schools, at home, in public, for all ages and genders, and not just because menstruation and education are a catchy rhyme.
I’m being slightly silly, probably because I started out doing menstruation education by accident, but I’ve found that humour really helps break down barriers when addressing taboos. What began as a comedy project about vintage ads soon became more serious MA research when I realised that in the world of disposable “femcare”, the euphemisms and language of shame and secrecy were still with us, and that aggressive marketing techniques were upholding old attitudes in schools with each new generation.
My studies evolved into the #periodpositive project: a piece of classroom research I began when I became head of PSHE (personal, social, health and economics education) and noticed the dearth of menstruation education resources available. Much of what I could find came from companies that also coincidentally sold disposable menstrual products, and this has been the case for almost 100 years – school booklets and freebies have always formed a large part of the leading brands’ marketing strategies. Their motivations aren’t lily-white, even if the costumes in their ads are. Now that SRE – sex and relationships education – looks like it’s on the way to becoming statutory (if the next government enacts the SRE bill), and public support for taboo-breaking in the media is growing, it’s time to finally address this.
Being #periodpositive isn’t about whether you love or hate menstruation. It’s about talking about reproductive health frankly, and without shame. My research recommendations are pretty straightforward: menstruation education should be consistently well taught by trained and confident staff. It should be factual, but go into the emotional and practical sides too, rather than just a hurried talk at the end of primary school and a lesson or two in secondary science. It should be all-genders inclusive, unbranded, and also take a wry look at menstrual product packaging and marketing.
Some teachers have developed their own resources, and are already clued in to all of this stuff. Now it’s about joining it up, training others, and sharing kid-tested and expert-approved lesson activities. Rebecca Stothard, a PSHE subject leader at a secondary school in Sheffield – and a colleague at the gender respect education project run by Development Education Centre South Yorkshire – has recently stopped using branded resources at her school: “We felt it was unfair to our students to promote any particular brand over another. We now show a range of different products, including cloth sanitary pads and menstrual cups. We want students to have as much information as possible about all the options so that they can make an informed, not influenced choice.”
This isn’t just an issue for teachers, or even parents, or even people who menstruate. Here are a few things anyone can do to get educated and talk to others about menstruation in a positive way.
1) Think about it – how did you first learn about menstruation? Was it confidently explained? And what about the person who taught you? How did they feel about menstruation? Were the resources branded? Did you get freebies?
2) Whether you menstruate or not, check out whether you’ve internalised any menstrual shame or are upholding any taboos. Get savvy to spotting euphemisms and tactics of shame used in menstrual marketing so you can deconstruct media messages, and help others challenge them too.
3) Find out about reusables. Fans champion them and their use has spread massively through word of mouth and small-scale promotion from a handful of companies and social enterprises. Funny thing is, they were left out of almost everyone’s school period talk because advertisers of disposables dominate the discourse. In the current economic climate, heck, in the current actual climate, disposable versions of most products are becoming unsustainable. Why not give a menstrual cup or a cloth pad a try? Cloth pads can be bought or homemade, and, after a quick soak, can go in the wash along with your pants.
Menstrual cups can be tipped out in the loo and washed properly when you get home, and they last for years. About 22 disposables are used per cycle, adding up to 11,000 items in an individual’s lifetime, or 4.3bn products a year in the UK – according to the Absorbent Hygiene Products Manufacturers Association.
To end on a more serious note, those of us in the UK who can afford disposables and have access to regular running water and private accommodation are incredibly privileged. We have a choice about whether we use reusables or disposables, and it may be stigma or a lack of awareness that makes some people hesitate.
Next month – 28 May – brings Menstrual Hygiene Day, a global initiative to both break taboos and improve menstruation management in countries across the world. We’re not quite there yet, but a little bit of education and taboo-breaking can go a long way. Here in the UK we’re so close to getting this stuff sorted out, and attitudes about menstruation can influence decision-makers, whether they menstruate or not, on both local and global issues. It’s pretty bloody important.