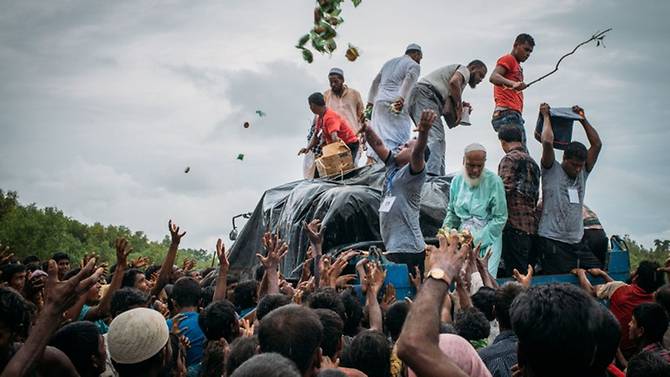 Two children and a woman were killed in a stampede for aid near a Bangladesh refugee camp, UN agencies said Saturday (Sep 16) amid widespread fights among Rohingya for food and clothing thrown from relief trucks.

The incident occurred on Friday at Balukhali in Cox's Bazar district where tens of thousands of Muslim Rohingya have camped for weeks after fleeing violence in Myanmar's Rakhine state, reports AFP.

"Two children and one woman were killed in a stampede during an unauthorised clothing distribution on the road in Balukhali Pan Bazar area," said a report prepared by a group of UN agencies and two charities.

AFP correspondents have witnessed violent scrambles for aid at camps around Cox's Bazar. Refugee witnesses have also told of stampedes.

A local rights expert slammed the government for the chaotic relief management, saying fights were breaking out each time an aid truck arrived and when food sacks were thrown to the refugees.

Two police officials told AFP however that they were unaware of any deaths of refugees due to a stampede in the Rohingya camps.

"We know two Rohingya have died on Friday at Balukhali area. They included a six-month-old baby who died of pneumonia," local police chief Mohammed Kai-Kislu said.

A 70-year-old man died of natural causes, he said, adding that another Rohingya man died on Saturday in a different place.

The UN said Saturday that 409,000 Rohingya have fled violence-wracked Rakhine state since Aug 25 when attacks by Rohingya rebels on security forces prompted a major crackdown by the Myanmar army.

Most Rohingya, who spent more than a week trekking cross-country from Rakhine to the Bangladesh border, have found camps overflowing and been forced to camp on muddy roadsides.