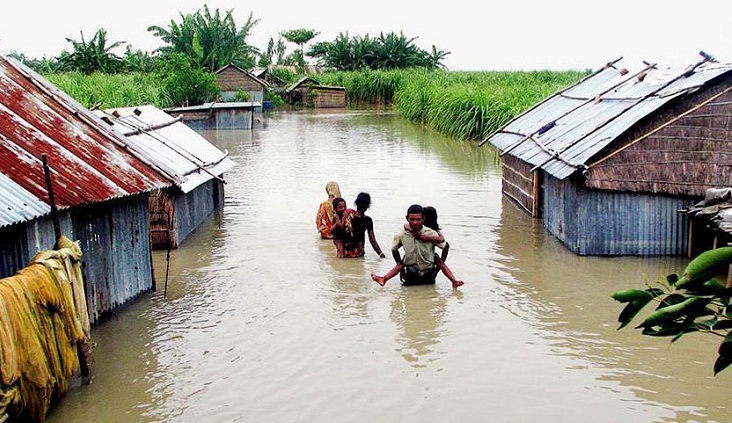 Onrush of waters from upstream region coupled with heavy monsoon largely grasped 20 out of 64 administrative districts claiming at least 20 lives amid fears of an impending severe deluge as major rivers continued to surpass bank lines, officials and experts said.

Disaster Management and Relief Ministry today confirmed 20 flood related deaths while the deluge affected some 586,000 people in 20 districts forcing 368,586 of them to take refuge in makeshift shelters as the country witnesses the second round of floods since June this year.

"We have been carefully monitoring the situation in those countries (as) the water will naturally flow downstream to us," he said adding that the
situation prompted authorities to scrap holidays of concerned officials and employees in 20 affected districts to make the available in facing the
situation.

Chowdhury said 10,630 tonnes of rice and Tk 3 crore 10 lakh would be distributed I affected districts and those at risk from the floods.

His comments came as experts feared the deluge to engulf vast part of the riverine nation in the coming week causing a prolonged flooding.

"All indicators suggest that the flood is likely to be severe this time," leading water expert Professor Ainun Nishat told BSS as Flood Forecasting and Warning Centre (FFWC ) records suggest that water levels in three out of four river basins were rising simultaneously.

Nishat said gushing waters from three sides of the upstream region would eventually tend to be deposited in central Bangladesh including areas around the capital Dhaka.

He feared that particularly the unprotected eastern part of the city could be submerged for a prolonged period inundating parts if the city.

"The crucial thing to be performed as preparedness to minimize damage is to protect and properly maintain the flood protection embankments which are in place . . . collapse of embankments could cause colossal damage," Nishat warned.

Gushing waters in the major Brahmaputra and its tributaries coupled with heavy monsoon rains in northwestern Dinajpur submerged railway tracks forcing authorities to suspend train services from and to the district with rest of the country,

Railway officials said train services in several internal routes in the region were suspended in the past two days as water washed away soil and
stones underneath the railway tracks.

According to FFWC the water levels will keep rising as India's northeastern states will see "heavy to very heavy" rains and continued and
simultaneous rise of waters in Bangladesh's three major basins in northeast, north and northwest region posed the threat of major flooding.

The lower riparian Bangladesh is criss-crossed by 230 rivers, 54 major ones being originated from upstream India.

FFWC officials said the water level in Brahmaputra, having its origin in China and entering in northern Bangladesh from India, exceeded the records of past 100 years at the Tebet part of the major stream.

The Teesta basin water level also surpassed the 98 years record and the rest of the three basins - the Ganges - this year saw te highest level of
waters in the past 75 years.

The FFWC predicted if there are more rains at the end of August, at least 25 districts will be affected by floods by September while Nishat said it was likely that the floods will spread to the mid-region of the country".

"The full moon phenomenon is to worsen the situation inflating further the river waters. . . but all we need to do is to protect in particular the flood
protection embankments which are in place to evade damage as much as possible," Nishat said.

Prime Minister Sheikh Hasina yesterday ordered procurement of food grains from abroad to face any possible shortfall against the backdrop of impending deluge.

Bangladesh witnessed a setback in crop production two months ago when a prolonged flash flood washed away sanding crops in north-eastern region.

Bangladesh witnessed four severe floods in the past four decades with one in 1998 being the worst one when two thirds of the county were inundated for nearly three months.