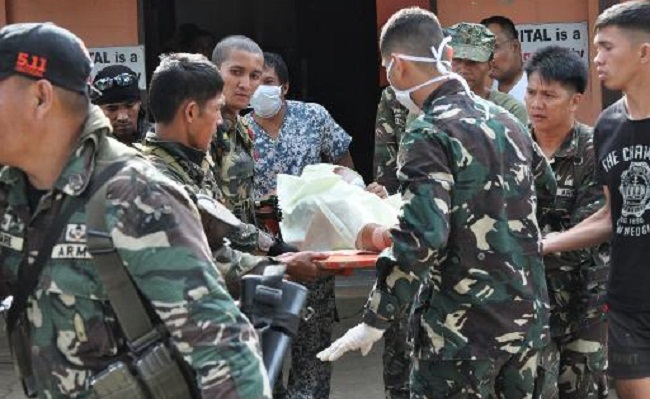 The military said it used artillery and helicopter gunships as they pressed on with the latest stage of a months-long offensive to wipe out the Abu Sayyaf, which is blamed for the worst terrorist attacks in recent Philippine history.
“Our operations are now intended to totally eliminate the lawless element,” Ensign Chester Ramos, spokesman for the military task force on Jolo island where the operation took place, told AFP.
He said the military, police and local government authorities “polished” their plans last year so they could launch a series of attacks against the group starting in December.
A “battalion-sized unit” of soldiers were involved in Wednesday’s fighting against about 300 Abu Sayyaf fighters, according to the military’s public affairs chief in Manila, Lieutenant Colonel Harold Cabunoc.
In the Philippines, about 500 troops typically make up a battalion.
“We are on the offence... we ambushed them. It is a running gun battle”, Cabunoc said, adding the fighting started in the morning and continued throughout the day.
He said five Islamic militants were killed but two soldiers also died, and nine others were wounded.
The fighting took place near Patikul town on Jolo, a heavily forested island with a majority Muslim population that has been a longtime stronghold of the Abu Sayyaf.
It came after another clash on February 6 on Jolo in which the military said it killed at least eight Abu Sayyaf gunmen.
The government has been struggling for years against the Abu Sayyaf, which was formed in the 1990s with seed money from Osama bin Laden’s Al-Qaeda network.
American special forces have for more than a decade helped to train Philippine troops how to combat the Abu Sayyaf.
The military says the Abu Sayyaf has only a few hundred gunmen.
But it has shown an ability to replenish its forces from the impoverished Muslim populace based in the south of the largely Catholic Philippines.
The Abu Sayyaf is infamous for funding its activities through kidnappings for ransom, including those of foreigners.
In October last year, the Abu Sayyaf released a German couple on Jolo that it had been holding for six months. The group said it released the couple after receiving the full 250 million pesos ($5.7 million) it had demanded for their freedom.
Last year, an Abu Sayyaf leader appeared in a video clip uploaded on the Internet in which he vowed allegiance to the Islamic State movement in the Middle East.