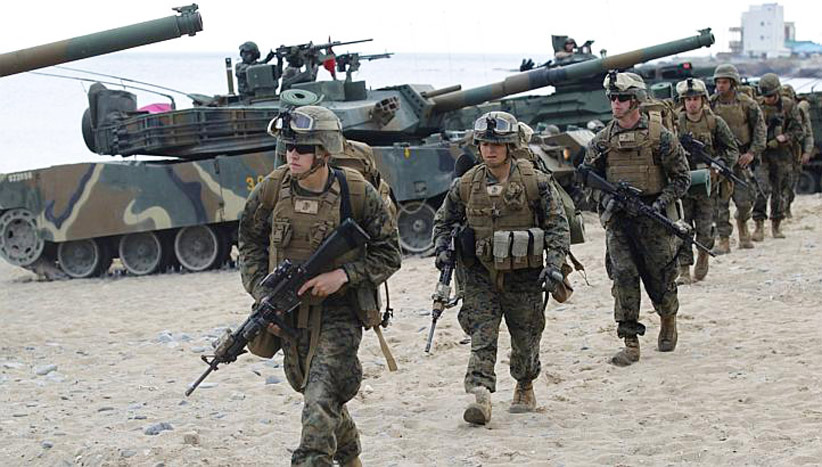 South Korea and the US have announced that their annual military drills will begin on 2 March - a move that will anger Pyongyang.
The exercises, called Key Resolve and Foal Eagle, always generate tension on the Korean peninsula.
Seoul and Washington call the drills defensive in nature. North Korea calls them a rehearsal for invasion.
Kay Resolve - a largely computer-simulated exercise - lasts 12 days and Foal Eagle eight weeks.
Foal Eagle involves tens of thousands of troops, with air, sea and ground components.
In a statement, the two nations' Combined Forces Command said North Korea had been informed of the exercises.
Drills in 2013 led to a major spike in tensions with North Korea
The US has had troops permanently stationed in South Korea since the end of the Korean War.
The conflict ended in an armistice rather than a peace deal, and the two Koreas remain technically at war.
In January North Korea said it would offer a moratorium on nuclear testing if the joint exercises were cancelled. The US rejected this suggestion as an "implicit threat".
North Korea has conducted three nuclear tests, in 2006, 2009 and 2013. Six-nation talks aimed at ending its nuclear programme have been stalled since early 2009.
In 2013 the joint exercises led to a prolonged surge in tensions, with North Korea threatening pre-emptive nuclear strikes and cutting a military hotline with the South.
Drills in 2014 passed off relatively quietly, however.
BBC 2015-02-24