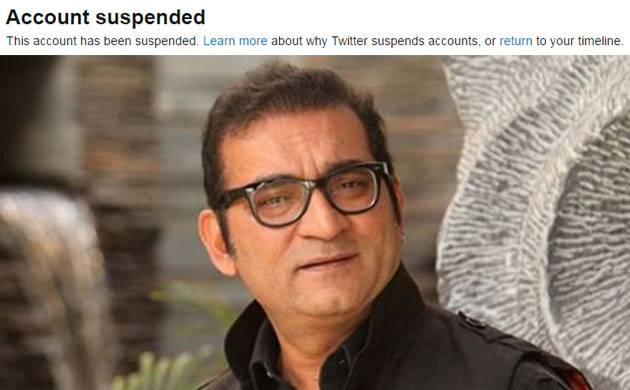 The move by the microblogging site came after social media users accused the 58-year-old singer of using “inappropriate” and “insulting” language. “Account Suspended: This account has been suspended...,” stated the message from Twitter on his handle.

The singer had received flak on the social media site for a series of inflammatory tweets against journalist Swati Chaturvedi, who had registered a police complaint against him last year in July. The complaint led to his arrest. On being released on bail, the singer reportedly broke into tears. The regret didn’t last long, for the defiant singer later said he would repeat his words if he wished to.

On May 22, Abhijeet spewed venom at some women Twitter users, including JNU student-activist Shehla Rashid, which prompted some of the netizens to lodge a complaint with Twitter. “Sincere thanks to everyone for the support. Abhijeet had to delete his tweet. His Twitter account has also been suspended,” Shehla tweeted.

Abhijeet had previously retweeted about the JNU student, “There is rumour she took money for two hours and didn’t satisfy the client... big racket.”

In another tweet, he had insulted a woman Twitter user when she called him out for his incendiary tweets, where he wrote, “You Ms Pak. Tell me your cage no? Will reach there... Will do the favourite pose.”

However, it is unclear if the decision taken by Twitter is temporary or permanent.

When contacted, Abhijeet said, “Author Arundhati Roy and people supporting JNU” were behind the suspension of his account. “Yes, I just saw it. They are trying to block Paresh Rawal also. All Arundhati and JNU group behind this after Paresh Rawal and I tweeted against Arundhati for her anti- India stand,” he said.