Ex-enclaves’ people to vote in UP polls today 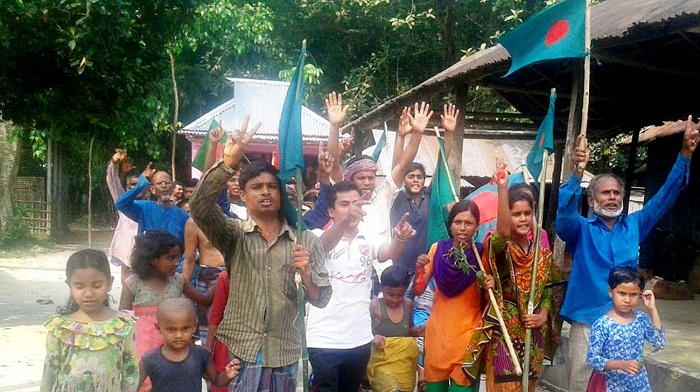 Voters in some 100 ex-exclaves are set to exercise their franchise for the first time as 22 Union Parishads (UPs) are going to polls there from 8am to 4pm on Monday.

Nearly 14,000 voters from some 100 former Indian ex-enclaves out of 111 inside three northern districts --Panchagarh, Lalmonirhat and Kurigram- will be allowed to apply their voting rights in the UP election, said officials at the Election Commission (EC) Secretariat.

Eight of the 22 UPs are in Panchagarh, eight in Lalmonirhat and six in Kurigram, said EC Assistant Secretary Ashfaqur Rahman told UNB.

The Election Commission has already completed all the necessary preparations to arrange the UP elections in the districts, said Rangpur regional election officer Monirul Islam.

A total of 400 UPs, including 22 in the now-defunct exclaves, are going to polls or by-elections across the country, he told UNB.

Of the 400 UPs, elections will be held in a few polling stations of nearly 200 UPs where the voting was earlier cancelled during the staggered countrywide UP elections held early this year, he added.

Full-fledged election will be held in 59 UPs, while there will be by-elections for one chairman post and some member posts, reserved seats set aside exclusively for women in 67 UPs, the official said.

Some 65 UPs are going to polls on Monday as two candidates bagged equal votes in the countrywide UP elections, he added.

The 111 ex-Indian enclaves inside Bangladesh, which were merged with the mainland of Bangladesh in July 31, 2015 following the ratification of land boundary agreement (LBA) by Indian Loka Sabha and Rajya Sabha unanimously, include 12 in Kurigram, 59 in Lalmonirhat, four in Nilphamari and 36 in Panchagarh.

According to EC statistics, a total of 8,935 voters from ex-enclaves will exercise their franchise in the UP elections in Panchagarh, while some 1,700 voters in eight UPs in Lalmonirhat and 3,098 in six UPs in Kurigram.

In Panchagarh, 39 chairman candidates, 98 women from reserved seats and 326 member contenders are contesting the elections in eight Ups under Sadar, Boda and Debiganj upazilas of the district.

In Lalmonirhat, 37 chairman candidates, 167 women from reserved seats and 213 member contenders are in the election race in eight UPs under Sadar, Hatibandha and Patgram upazilas of the district.

In Kurigram, 32 chairman candidates, 90 women from reserved seats and 219 member contenders are contesting the elections in six UPs under Phulbari and Bhurungamari upazilas of the district.

On September 26 last, the election schedules were announced for the UPs after making the eligible inhabitants of ex-enclaves voters this year.

Under the agreement, India exchanged 111 enclaves measuring 17,160 acres to Bangladesh and received 51 enclaves covering 7,110 acres, which all were located inside Cooch Behar, ending the decade-old sufferings of the people living in enclaves on both sides of Bangladesh and India.