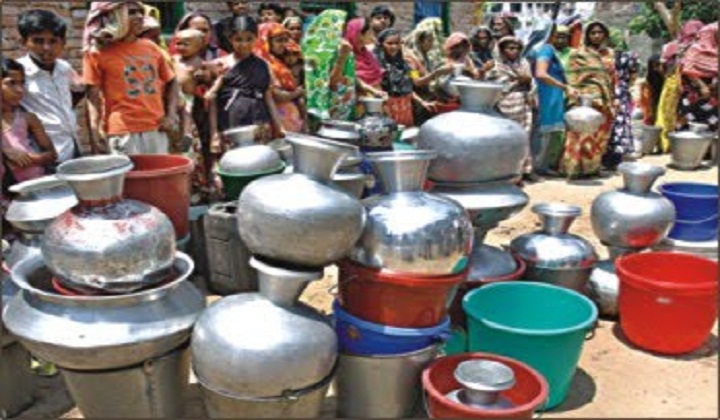 Thousands of the people in the capital were suffering from a dire shortage of water during holy Ramadan as water supply to households was disrupted due mainly to a gradual fall in the groundwater level.

Hundreds of people staged street protests against the dwindling supplies of water during the scorching summer. They demanded adequate water supply to assuage their sufferings.

However, WASA officials cited a sharp fall in groundwater level and insufficient water-treatment plants as the main causes of the water crisis.

The protesters withdrew the road barricades when Dhaka Water Supply and Sewerage Authority (WASA) assured them of meeting their demand.

Earlier, two mayors of Dhaka city and acting mayors and officials of several city corporations were briefed at the LGRD ministry on the preparations and problems ahead of Ramadan.

At the meeting, LGRD Minister Khandaker Mosharraf Hossain asked WASA officials to provide water to every house in the capital if the piped water supply falls short during Ramadan. However, the WASA failed to do so.

Sharifa Begum, a house owner of Shewrapara, said they have not been getting water regularly for two months. “We are buying drinking water from shops and WASA vans to fulfil our demands.” She alleged that many tenants are leaving their houses in the area due to serious water crisis.

Rafiqul Hasan Chowdhury, a resident of Madhya Badda, said, “We are not getting water supply regularly from WASA since the arrival of summer.”

“Several times, we have filed complaints to the WASA against the shortage of water, but any fruitful action was yet to be taken.”

Sharif Mahmud, a resident of Rampura, said, “We don’t get adequate supply of water round the clock. We get water twice a day for an hour.”

A WASA official said, “The fact is that water crisis intensifies in summer as the groundwater level falls during the period. We need more new water pumps here. However, we are facing difficulties to set up water-pump houses due to lack of land.” The residents of Dholaipar and Kutubkhali in Donia area alleged that dirty drinking water has been supplied from the WASA in the recent times.

The people of Derma area alleged they have not been getting water regularly for 25 days. They complained to the WASA and local representatives several times.

Finally, they came down on the street on Monday as no action was taken to resolve the water crisis.
According to the WASA, it has the capacity of producing 2.42 billion litres of water a day against the demand for 2.30 billion litres.

A WASA engineer said, “Though the production is more than the demand, the crisis has been created because of some technical problems, including old supply lines.”

The water supply authority is carrying out their work in 11 mode zones —- 10 in the capital and another in Narayanganj.