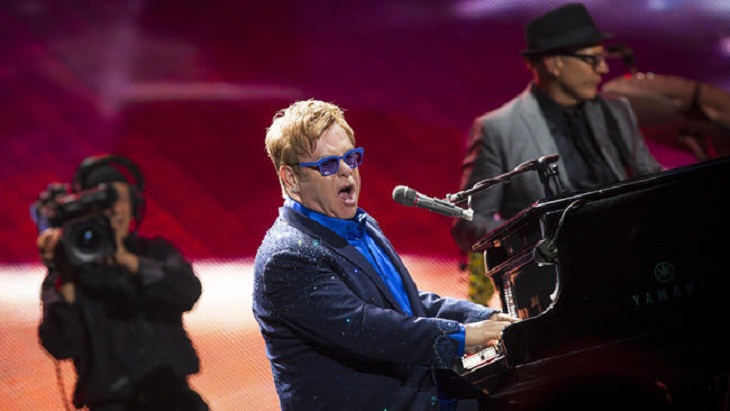 Elton John is happy with his latest album, "Wonderful Crazy Night," which comes out on Friday, the pop superstar is irrepressibly upbeat as he reunites with his old backup band and celebrates his life.

And why not. With more than 250 million albums sold, John is one of the most successful musicians in history.

After well-publicized struggles with addiction and eating disorders, the 68-year-old is the proud father of two sons and in 2014 married his longtime partner after Britain legalized gay marriage.

The singer once famous for his flamboyance suggests on the new album that his life has turned a page.

"I'm looking up more than I look down / The view's a whole lot better a second time around," sings John, as he observes, "Time is wasted looking back."

John's piano guides "Blue Wonderful," a steady-paced love song likely to appear at many a wedding, and the joy gradually builds as the album progresses.

The Rocket Man rocks out on "Guilty Pleasure" before assuming an inspirational feel on "Tambourine" and "The Open Chord."

On "The Open Chord," John delights in family life as he sings of "a new broom sweeping up the sins I no longer play" and clipping "the horns that the devil used to make me wear all day."

John remains socially conscious -- in recent months, he made headlines for challenging Russian President Vladimir Putin on homophobia and also joining the fight against climate change.

But whatever the state of the world, John, as he said in a recent interview, has found "an uplifting tail-end to my life."

"I have never been happier," he told Britain's Press Association.

"I never, ever expected to find fatherhood so joyous. I expected to enjoy it, but not to be so joyous," he said.

"There hasn't been one nano-second where I haven't enjoyed it, except when my children are maybe sick and I worry about them."

Also adding to the good mood -- John has reunited with his original band including guitarist Davey Johnstone and drummer Nigel Olsson.

Johnstone, who has also played with other stars including Rod Stewart and Meat Loaf, has been instrumental to John's sound since 1971, although he sat out the last album.

That work, "The Diving Board," came out in 2013 and was John's first in more than 30 years in which he did not include any of his regular band members.

The last album was defined by a stripped-down sound as John concentrated on his piano playing, retreating into his own reflections.

"Wonderful Crazy Night," by contrast, returns to John's defining style, with a piano that is rooted in the blues but producing quickly memorable pop hooks.

While the sound is a time-tested way to please fans, it is unlikely to surprise many of them. About the only unexpected element on "Wonderful Crazy Night" comes on "Claw Hammer," which has a touch of Indian instrumentation.

But John is shifting in different ways. One of the world's highest-grossing performers, particularly through Las Vegas residencies, the singer has said he plans to limit shows to focus on his family.

And the veteran pianist, whose hits include one named "Sad Songs," said he had to adjust his playing to his recent mood.

"As a piano player, I usually write miserable songs."