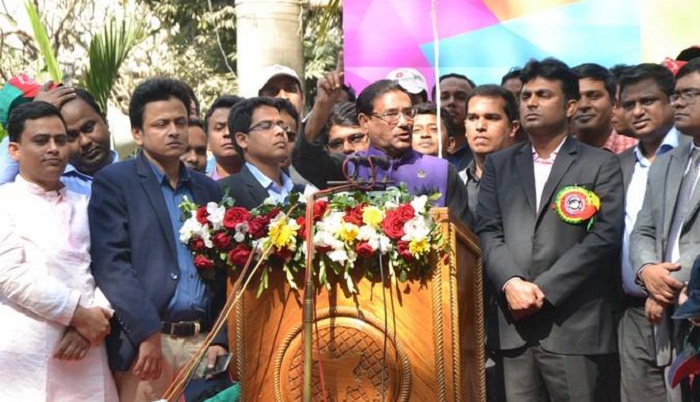 Awami League (AL) presidium member and Roads, Transport and Bridge Minister Obaidul Qauder on Monday said BNP is not a challenge to Awami League as its politics is now trapped in quicksand.

"BNP's politics is now in quicksand. The mistake BNP did by boycotting polls on January 5, 2008 it should observe the day as repentance day not as Democracy Killing Day", Quader said while speaking at the 68th founding anniversary programme of Bangladesh Chhatra League (BCL) at the Teachers-Student Centre (TSC) on Dhaka University campus.

He called upon the leaders and workers of BCL, student wing of Bangladesh Awami League, to acquire quality education and work to build up a non-communal Bangladesh, BSS reports.

Criticizing BNP politics, the minister said, "What's the challenge in front of us? It is definitely not BNP's movement as it has been trapped in their misdeeds. Now they are conspiring to destroy country's democracy in the name of recovering democracy."

Senior AL leader also said the vested quarter, which is hatching conspiracy to turn Bangladesh as a stateless nation like Pakistan which is living in fool's paradise.

"Bangladesh will never be identified with the dangerous title what Pakistan is now regarded because Prime Minister Sheikh Hasina is leading the country towards right direction," he observed.

Earlier, a birthday cake was cut at Dhaka University Curzon Hall at eight past one minute. BCL also brought out a colorful rally from the Fine Arts Institute of DU campus and it ended at the party central office premises at Bangabandhu Avenue after parading thoroughfares of the city street.

As part of the founding anniversary programme, BCL also paid its rich tribute to Father of the Nation Bangabandhu Sheikh Mujibur Rahman by placing wreath at his portrait at Dhanmondi in the morning.

Bangladesh Chhatra League, one of the oldest and biggest student organizations in Asia, stepped in 69 years today. It was established on January 4 in 1948.