As hospitals around the world face a surge of patients with breathing difficulties from COVID-19, the scarcity of ventilators has forced doctors to make life-or-death decisions 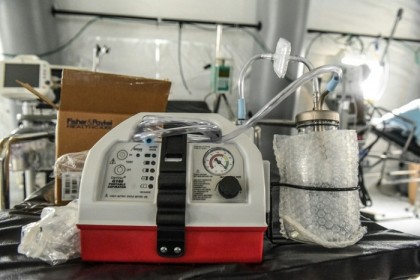 On Monday, Mandetta again stresses the importance of social distancing in order to slow the virus

OneWeb, the high-profile London-based satellite start-up, has filed for bankruptcy protection in the US

Online advertising is expected to be affected by the pandemic as many marketing campaigns are cut back, and ad targeting is thrown into chaos

The White House has reached out to Big Tech companies for help in the worst pandemic in a century, but Google and Facebook both told the AP they are not sharing people's location data with governments

Folding Smartphones are returning with grandeur. As a new soldier in this race, Samsung Galaxy Z Flip tries

"Please leave the room, close the door and start a disinfection," says a voice from the robot

Netflix urged to slow streaming to stop the internet from breaking

Facebook scrambles as use soars in time of isolation

Teams are hard at work to make sure all the services run smoothly, because this is clearly a time when people want to stay connected

Rosen says the problems are unrelated to any changes to its content moderator workforce. The company reportedly sent its human moderators home this week

Facebook is matching up to $10 million in donations, and 100 per cent of funds will directly support the work to prevent, detect and respond to the outbreak around the world

And that's why sales of a device-cleaning machine called PhoneSoap are soaring.

The concern over coronavirus is growing as the death toll from it has reached 4,633 globally as of Thursday

Elon Musk's big worry now SpaceX not getting to Mars

The tombs, dating back to the Warring States Period (475-221 BC), are unearthed in Qu County in the province

Compared with other navigation systems in the world, the design of the BDS constellation is unique, including medium earth orbit, inclined geosynchronous earth orbit

Google is already among technology companies including Facebook, Microsoft and Amazon that have given employees the option of working from home instead of going to the office

Australia's federal court can impose a fine of A$1.7m (£860,000) for every serious or repeated interference with privacy

The latest tech-inspired lifestyle solutions are gaining traction as more people are advised to work from home, and many conferences and gatherings are cancelled

The internet is infested with this criminal conduct, and the images, and photos, and video of it. That’s our target

The ads encouraged readers to "take the official 2020 Congressional District Census," but clicking on the messages directed users to a Trump campaign website

"A rule barring such hate speech targeting religious groups now applies to "language that dehumanizes on the basis of age, disability, or disease," the Twitter safety team says in an online post

It will be the fifth exploratory vehicle, projected to land in February 2021, on the Red Planet following in the tire tracks of the similarly augustly titled Sojourner, Spirit, Opportunity, and Curiosity

The Psyche mission currently is targeted to launch in July 2022 on a Falcon Heavy rocket from Launch Complex 39A at Cape Canaveral Air Force Station in Florida, the US space agency said in a statement late Friday

The Australian think tank identifies a network of at least 27 factories in nine Chinese provinces where more than 80,000 Uighurs have been transferred

Do you find pleasure in flipping your Smartphone? The style and comfort of folding phones vary with the advancement