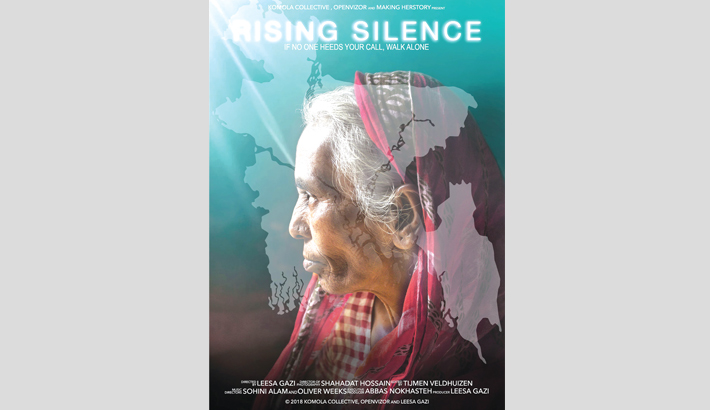 Rising Silence, a feature documentary film directed by Leesa Gazi and produced by Komola Collective, Openvizor, and Making Herstory, has shed light on the lives of Birangonas (war heroines of 1971) of Bangladesh. The film will be premiered at the main auditorium of National Museum at 5pm on January 12 in the 17th Dhaka International Film Festival (DIFF). ‘Rising Silence’ is a journey of relationship between women dealing with war, violence, and daily prejudice to heal and create the future with unconditional love. During the Liberation War of Bangladesh, the Pakistan Army used rape as a weapon of war for humiliating the freedom fighters and breaking their spirit. Over the course of nine months of conflict, they and their local collaborators raped and tortured around 250,000-400,000 Bangladeshi women and girls to undermine our national, political, and cultural solidarity. Another cause of such rape was to prevent Bengali women from becoming mothers in their own community by making them socially unacceptable. Realising this fact the Bangladesh government within six days of the completion of the war publicly declared that every rape victim of Liberation War will be called as Birangona and took some initiatives to train them in different trades and assist them financially. However, after the sudden change in the political scenario in 1975, Birangonas were socially ostracized and attacked, and seen as a symbol of shame!

Leesa Gazi, a British Bangladeshi actor, playwright and founder member of a London-based arts company Komola Collective, has brought her film to be premiered at DIFF. Her father was a freedom fighter. She grew up hearing numerous stories of the war. In 2010, Leesa met with 21 Birangonas. She then started collecting their personal accounts to document their stories and brought a theatrical venture with Komola Collective. She co-wrote a play ‘Birangona: Women of War’, which was nominated for the Offie Award in the UK. She also performed in the play and developed its concept. By the time Leesa developed a close relationship with nine Birangonas. In 2015, they invited Leesa in their villages. Keeping aside the history and politics, they shared their experiences as freedom fighters, citizens, daughters, sisters, wives, mothers, and grandmothers. Ahead of the release of her film ‘Rising Silence’, its director Leesa Gazi has shared her experiences and many more things with ‘morning tea’.

What is your impression about your upcoming film? How have you depicted women in ‘Rising Silence’?

“I was fortunate to meet some outstanding women while working on them. At the end of the journey, I realised that how the struggle and positive life spirit of Birangonas has shown me the path to find myself and what I am capable of as a woman. Their stories have given me a sense of humanity, a sense of pride which I have never experienced before. The human capacity to endure and thrive is innate. We don’t know about our full potential in terms of strength, resilience, compassion and our power to love until we are tested. Their stories are living evidence of that. I wanted to show these women on their own terms, beyond labels and statistics. I remember the moment while I was going to meet them for the first time - I never thought what was waiting for me. Their pain was unbearable to go through. However, once I met them, it looked real and it felt like it could have happened to anyone. I realised ‘seeing is believing’. That is why I have tried to show them in their own settings so that everyone can understand the pain and plight that life had thrown before them. Despite their unimaginable sufferings, they are still brave, resilient, spirited and loving. I have depicted this wonderful strength and spirit. This film is not about rape. It’s about the sweetness of the hearts of these formidable women.”

Why have you chosen such a title for your film?

“The silence that I am talking about is deliberately created by us. We, the people both in and outside Bangladesh, haven’t spoken much about these women for decades. While planning to make this film I thought this kind of work will help them to come out of this silence. I have found that the Birangonas actually have a plenty of things to say. They all have their own stories. These are the stories the world has ignored. These are the stories that need to be told. And I have felt that if these stories are not filmed and preserved now, these will be lost forever. There is no scope of breaking their silence if we continue to stigmatise them and don’t listen to them. Due to the quietness of so many years this silence is now rooted deep in their minds. This is so intense that it feels louder than a thousand screams.”

Could you tell us about the filming process of ‘Rising Silence’?

“This is a feature documentary that follows a presenter who travels back to her homeland Bangladesh in a quest to meet the survivors of the 1971 martial rapes. The presenter takes us on a personal journey through her encounters with eight Birangonas. She and the crew live with each of the women and their families for a short period of time to depict their lives, stories, and hopes.”

What were the places you need to visit for shooting the film? What challenges did you face while making the film?

“Our Research Advisor Hasan Arif helped us to find out most of the Birangonas who were featured in ‘Rising Silence’. We did our filming in two phases. For the first phase we were on the road for 37 days and travelled to Thakurgaon, Sirajganj, Sherpur’s Shohagpur, Khagrachhori, and Dhaka. In the last phase, we worked for 6 days in Kolkata. It was quite a troublesome time when we went for shooting in November-December 2015. We were frustrated about the nasty killing of bloggers and foreign nationals in the country. There were a couple of British nationals in our team. We were obviously very concerned about their security. Habibur Rahman, the then Police Super, helped us a lot. He ensured our safety by arranging police security for us throughout our journey. We are immensely grateful to him for that.”

What do you want to achieve through this film?

“This documentary proudly holds the voices of the survivors of rape. This film is about the strength of women who have picked themselves up after facing unspeakably brutal physical and emotional abuse. It is about their will to survive. ‘Rising Silence’ has been made to honour their insurmountable courage and bring a crucial part of a nation’s history to the forefront that has been ignored and forgotten for many years. I hope this film will also make the world see the ordinary South Asian women in a different way. Their resilience, bravery, openness, their appreciation of beauty and nature and above all their tremendous sense of love and compassion have been depicted through their inspiring stories. I simply wanted to make this film before it was too late. Five of the women we filmed died while we were in the post-production stage. Hundreds of such stories already have lost and thousands of these stories are still untold. The world cannot afford to have such a significant part of its history disappear. The legacy of Birangonas parallels the history of Bangladesh. My only aim is to safeguard the stories of these women so that everyone remembers them with love and pride.”

While filming some moments pop up when the humane side of the director wants to stop recording and hug the person. In the same situation there are other directors who might want to hold the shot, zoom in and capture an extraordinary moment. How have you dealt with such situations?

“I never considered this film from a journalistic point of view. There were times when things happened, emotionally we felt apart but we did not feel it right to film those scenes. I can vividly remember the moment while we were filming a story of three sisters (Amina Begum, Maleka Begum and Mukhlesa Begum). There were, in fact, four sisters who were kept imprisoned in a camp for months during the war. Right after the war their youngest sister Budhi died of internal hemorrhage. Three sisters together buried their beloved sister. While we were filming ‘Rising Silence’ they wished to have a milad (a kind of religious prayer) in honour of her memories. Budhi died in 1972 and the three sisters could finally arrange a milad for her in 2015 where family members and neighbours joined them in prayers. It took 43 years for them to arrange this. At the end of the prayers, Maleka Apa couldn’t bear the pain. She fainted away. We rushed towards her to comfort her and fetch her water. Our DOP Shahadat Hossain and camera person Matt Kowalczuk did not wait for me to say ‘cut’. They knew what to do and stopped filming. We have been very clear about how to go about it. We never compromised the dignity of these incredible women.”