Martyred Intellectuals' Blood Debt Not To Be Repaid

The role of the Liberation War in eliminating the political, economic, social and cultural disparity of the Bengali nation, as well as in the creation of independent Bangladesh, is immense and undeniable. The people of East Pakistan accepted the Liberation War of 1971 as a means of liberation from their long-term deprivation, exploitation, torture and oppression.

They also jumped into the battle for an independent motherland, responding to the call of Bangabandhu Sheikh Mujibur Rahman, the greatest Bengali of thousands of years and the Father of the Nation who was the symbol of their hopes and aspirations, the strong voice of their demands. After nine months of bloody war, in return for the blood of three million martyrs and the honour of two lakh mothers and sisters, victory came on December 16, 1971. Victory is achieved. An independent sovereign country, Bangladesh, was born on earth.

Just as we have lost countless brave freedom fighters in the war of independence, we have also lost hundreds of patriotic intellectuals. Pak invading forces brutally killed the best people of the Bengali nation in a very well-planned manner with the help of traitors Razakar, Al-Badr and Al-Shams. They carried out this killing from the night of March 25, 1971, till the last moment of the Liberation War.

It is said that education is the backbone of the nation, and intellectuals are its brains, because they show the way of light to the nation with their talent, thinking, wisdom, labour and patriotism and help in nation-building. The contribution of the martyred intellectuals to the formation of Bengali nationhood and independence should never be forgotten. Their writings, suggestions, theories, information, data and active participation played a valuable role in the Liberation War. 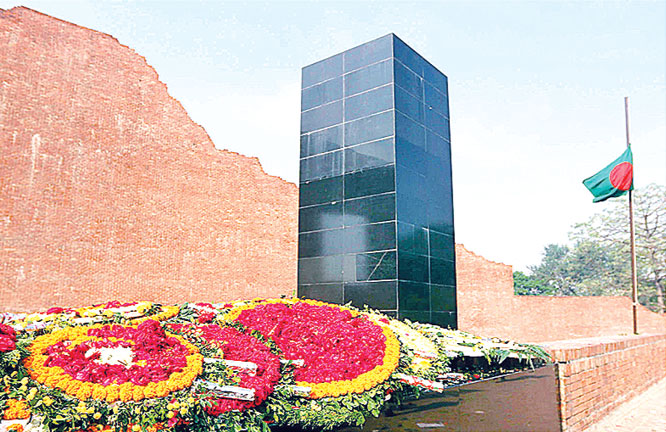 During the nine-month-long Liberation War, brave freedom fighters were also killed along with countless ordinary people. Before the great victory was achieved on December 16, 1971, when the West Pakistani occupation forces realized their defeat was inevitable, they formulated a despicable blue plan to demoralize the Bengali nation. According to their despicable plan, from 7th to 14th December, the final massacre was carried out. During this period, teachers, doctors, engineers, social workers, politicians, poets, writers, journalists and artists were selectively killed who were intellectuals of the Bengali nation. In remembrance of this incident, the Bengali nation celebrates December 14 every year as the 'Martyred Intellectuals Day.

On December 14, just two days before the victory, the most brutal and heinous crime was committed by the West Pakistani occupation forces and their local allies Al-Shams, Al-Badr and Razakars. These were planned, calculated and cool-headed killings aimed at crippling the backbone of a nation struggling to break free from the clutches of Pakistani troops.

If blood is the price of freedom, the people of Bangladesh have paid it in full in the nine-month-long war against the oppressive occupation forces of Pakistan. In exchange for three million lives, the nation got the desired freedom. During the nine-month Liberation War, the Pakistani occupying forces and the death squads consisting of local assassins like Al-Badr, Al-Shams and Razakars killed the best intellectuals of the Bengali nation. The intellectuals were defined as a litterateur, philosophers, scientists, painters, teachers, researchers, journalists, lawyers, doctors, engineers, architects, sculptors, government and private employees, politicians, philanthropists, cultural workers, and people associated with films, drama and music. They were making significant contributions to the development of Bangladesh through intellectual activities and were picked up, shot or stabbed to death and killed in Rayerbazar and Mirpur. They were dumped in the swamp.

Later mutilated bodies of the victims were recovered from these swamps. Similar atrocities have been committed in other places outside Dhaka. Their crime was that they were Bengalis and enlightened people. Above all, they represented the main driving force of the nation and acted as beacons for the exploited people. They were also ardent patriots who believed the nation would be independent one day. Bangabandhu Sheikh Mujibur Rahman's historic speech on March 7, 1971 at the Racecourse Maidan stood for forming an independent secular state. The martyred intellectuals were in favour of Bangabandhu.

The West Pakistani ruling class and their allies understood very well that the intellectuals of this country were a significant threat to them. It was they who sowed the seeds of rebellion among the ordinary people. The voice of protest was the loudest, and the courage to defy authority was aroused among the ordinary people by them. So if the common people's power source can be cut off, then the rest of the task of keeping them subdued will be easy. The assassins worked on such a despicable plan and succeeded wildly.

History reveals that the conspiracy to eliminate the intellectuals was hatched by General Rao Farman Ali, aided by Brigadier General Bashir and Captain Qayyum and notorious Bengali masterminds like Ghulam Azam and Maulana Mannan. In November 1971, the West Pakistani occupation forces, led by the Sub-Zonal Martial Law Administrator Brigadier Bashir, began briefing Al-Badr, Al-Shams on their plans. A curfew and blackout were imposed on December 4 to facilitate the plan. From December 10, the killing of intellectuals started in full swing. Al-Badr went from house to house during the blackout, capturing and brutally killing enlisted scholars. Many of them disappeared and were never found again.

The most heinous act was done by Al-Badr, Al-Shams forces and their allies led by the notorious character Chowdhury Mainuddin. They abducted intellectuals dressed in black and kept them in concentration camps at Mohammadpur Physical Training Centre, Dhanmondi High School and MLA Hostel's torture cell. After brutal torture, they were taken to a brick kiln in Rayerbazar and a swamp in Mirpur and brutally killed.

Every year we remember the best intellectuals of the nation by observing Martyred Intellectuals Day. Every year in this month of victory, we celebrate the joy and mourning on this day. We remember that not only did we gain freedom, but we also paid a heavy price for it and proved to the world that we could gain freedom from total tyranny.

Tragically, the history written in the blood of the martyred intellectuals has been repeatedly distorted after the victory of independence. They were not correctly remembered. A false narrative has been made, and the villains of the great Liberation War have been made heroes. But this false history did not last long. They are thrown into the dungeon.

The intellectuals were the best people in the Bengali nation. They have always worked for the country with their talent and wisdom. They were steadfast in their position to get the rights of the country's people. They set great ideals of sacrifice for the country. According to that ideal, we will develop ourselves as worthy citizens. Only then will it be possible to show proper respect to the martyred intellectuals, the millions of brave freedom fighters in the great liberation war, and the mothers and sisters who lost their dignity.

It is said that true intellectuals are never satisfied with their time and the world around them. They guide the nation against injustice and evil for the nation's greater welfare. They did the same during the great liberation war of 1971, which is why the ruling class brutally killed them.

Therefore, we must unite and stand against all the evil forces that do not bear the spirit of Liberation War and the country because the intellectuals who were killed during the war of liberation have taught us the lesson of standing against evil forces. And in this way, it will be possible for us to pay the blood debt of the martyred intellectuals; otherwise, their blood debt will never be repaid.