Netherlands coach Louis van Gaal said on Monday that he thinks Cody Gakpo will "evolve much further" after the youngster's two crucial goals at the World Cup.

The 23-year-old already has 13 goals and 17 assists for PSV Eindhoven in all competitions this season and has been heavily linked with a possible move to a top European club, most notably Manchester United.

His header in a 2-0 win over Senegal and fine left-footed strike in a draw with Ecuador have put the Dutch in pole position to qualify for the World Cup last 16 from Group A.

The Oranje need only to avoid defeat against already-eliminated hosts Qatar today to be sure of a place in the knockout phase.

"I had more or less expected that he would evolve this way but I believe that he's going to evolve even further, much further, so I'm not surprised (by his performances) at all," Van Gaal told a pre-match press conference in Qatar.

"It's marvellous that he can do this on the world stage."

The winners of Group A will face the Group B runners-up in the last 16, while the second-placed team will take on the other group winners. 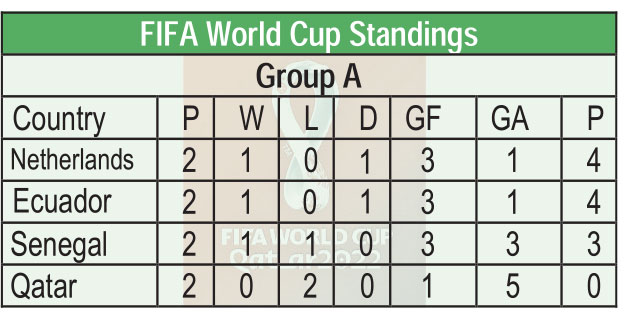 England are currently top of Group B, with Iran sitting in second place. The Dutch are level with Ecuador at the top of their standings and goal difference will decide the group winners if both teams win their games.

Ecuador take on Senegal at the same time the Netherlands are facing Qatar at the Al Bayt Stadium.