After visiting the Karnak temple in the afternoon, we moved forward towards IPET-RESYT, the Luxor temple. Ipetresyt means ‘the Southern sanctuary’ in Egyptian. It is on the same bank of the River Nile as that of the Karnak temple. It is about three kilometers south of the Karnak temple.  Here we had to pay 160 EGP as an entry fee. At around 4 pm we entered through the main gate, which is in the east of the temple site. In the meantime, the Sun has gone down to give us respite from the scorching heat. The Luxor temple is like the Karnak temple; however, it is much smaller in size and here Ramesses II was signified. There are sphinx processional of  Nektanabo I, Obelisk of Ramasses II,  statues of Ramasses II, the courtyard of Ramasses II, the pylon of Ramasses II, the colonnade of Amenhotep III, the courtyard of Amenhotep III and chapels. Here the granite statues of Ramasses II are wearing ‘Pschent’ the double crown, adorned with a coiling cobra on his head. This symbolizes that he is the pharaoh of a united Upper and Lower Egypt.When Egypt was united, the white crown of Upper Egypt and the red crown of Lower Egypt were joined into a double crown. Rulers wore golden cobra (uraeus) headdresses on their foreheads as a symbol of their dominance and authority.

When it comes to Egypt's ancient civilization, Luxor is among the country's most inestimable heritage. It was the capital of Egypt for 500 hundred years, from 1500 to 1000 BCE. Luxor temple was constructed approximately 1400 BCE. The construction of this temple was ordered by Amenhotep III (circa, 1400-52 BCE) in 1391 BCE. However, he could not complete its construction, later Pharaohsfinished its construction. Tutankhamen (1336-27BCE) and Horemheb (1323-1295 BCE) contributed much to its construction and then Ramasses II (1279-13 BCE) added pylon, obelisks and statues at the front of the temple.

Passing the premises of the temple site we reached infront of the lone pylon of the temple. This pylon was built by Ramasses II and it has two towers measuring 24 meters high and 65 meters wide. On the wall of it,in a submerged relief carving, it is shown that he is taking part in the Battle of Kadesh. There 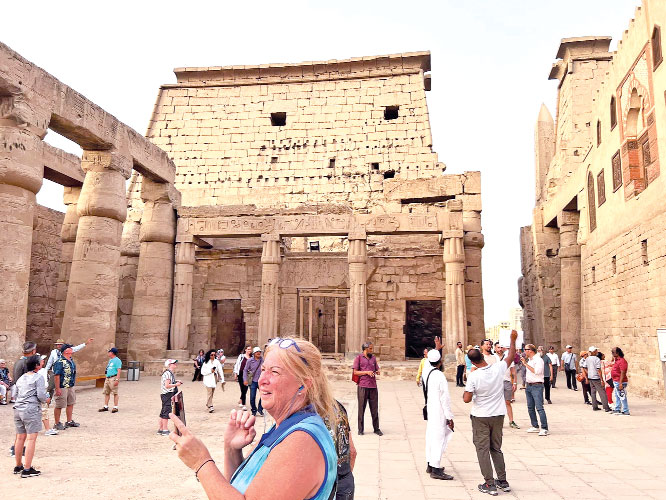 are six statues of him in front of the pylon, three on each side. Two seated statues, at the base of one of which it is seen that the Nile god ‘Hapi’ is tying the heraldic flowers of Upper and Lower Egypt, representing him as if he is ruling Egypt from his court. Among the other four statues, one is in standing and the other three are in walking posture representing him as if he is walking in four corners of Egypt to oversee his kingdom. There were two obelisks of 25 meters high, built by Ramasses II once stood before the gateway at the front of the pylon, however, only one remains. The other one, which was closer to the west, was presented to France government by Muhammad Ali Pasa in 1829, and it today stands at the Place de la Concorde in Paris.

Theban triad Amun, Mut, and Khonsu are honored in the Luxor temple and it is also dedicated tothe rejuvenation of kingship. Promoting the fertility of Amun and the Pharaoh was the main goal of the yearly Opet Festival, during which priests carried a cult statue of Amunand marched upstream of the Nilepassing a three-kilometer avenue of human-headed sphinxes, which previously connected the Karnak and Luxor temples, from the neighboring Karnak Temple to visit his southern territory and to reside there for a while with his consort Mut. Theavenue is believed to have been lined with 1,350 sphinx statues. Thereare chapels and those were supplied with offerings. Six of these chapels were constructed by Queen Hatshepsut (1479–1425 BCE), and each one served a specific purpose, such as to receive Amun's beauty or to cool his oar.

The Luxor Temple is the oldest building still in use today for purposes other than archaeological research or tourism. Atop the left side (east) of the Ramasses II courtyard, situated on the antique columns, is an operational Abu Haggag Mosque. Additionally, the Romans transformed a portion of the Luxor Temple into a church in 395 AD.And later a mosque wasbuilt in 640. Therefore,this site is in continuous religious observance totaling more than 3,400 years. The temple and its precincts served as a legionary fortification and the seat of the local Roman authority throughout the Roman era. A chapel devoted to the goddess Mut was eventually converted into a church, and Christians also tore down statues and artwork as a means of resisting paganism.Roman officials also painted over the Amenhotep III-era adorned pharaonic walls. They added many layers of plaster to the surfaces. There is also a cross inscribed on the walls of the pylon by the Christians. There is an open-air museum, where broken parts of columns, pylons, statues, and walls are on display. From this site, Thutmose III organized his military expeditions, Akhenaten first contemplated the nature of divinity, and Ramesses II devised his expansive construction plan. Moreover, many Egyptian pharaohs might have been crowned there.

Behind the pylon there lies the courtyard of Ramasses II. This magnificent courtyard makes up 57by 51 meters. A shrine to Thutmose III is located in the northwest corner of the court, and 74 papyrus columns with bud capitals surround it. Several standing colossi of Ramesses II are located in the court's southern section.Relief of the religious procession of bulls to commemorate the opening of the great pylon built by Ramesses IIcan also be seen on the west wall. Moreover, scene of sons of Ramasses II, he had more than a hundred sons and more than 50 wives, leading a procession with bulls of offerings and entering the temple can be sighted on the wall.

Passing the courtyard of Ramasses II seven pairs of open-flower papyrus columns measuring 16 meters high can still be seen supporting the massive architrave blocks in the Colonnade of Amenhotep III.Amenhotep III's courtyard is 45 meters by 56 meters in size and has double rows of papyrus columns on three sides.There is also a Hypostyle Hall, which features four rows of eight papyrus columns, 32 in total. The names of Ramesses II, Seti I, Seti II, Horemheb, and Tutankhamun are depicted in reliefs on the walls of the hall. The eastern wall was adorned by Tutankhamun, however, Horemheb afterward removed the boy king's name and replaced it with his own.

As we reached the rear of the temple we found a granite shrine dedicated to Alexander the Great (332-305 BCE), who claimed that he was crowned at Luxor; however, he might have never been to the southern region of Memphis. Four small rooms and an antechamber leading to the sanctuary, Alexander the Great's chapel, and the birth room are located at the back of the hall. Here some inscriptions are found in Latin letters and some reliefs of Roman people can also be seen and those were inscribed by erasing the previous pharaonic reliefs.

Luxor temple is a must-visit site in Egypt. Structures of three and half thousand years would make anyone mesmerized. However, precautionary measures must be taken for avoiding scorching heat.