August 1st 2022 marks the 95th anniversary of the founding of the People's Liberation Army (PLA) of China. Over the past 95 years, the PLA has been dedicated to the service for the Chinese people and Chinese nation, safeguarding world peace & development, and boosting the partnership with Bangladesh and other peace-loving countries in the world.

On August 1st, 1927, the forerunner of the PLA, led by the Communist Party of China (CPC), held an uprising in Nanchang City, which marked the CPC had established its own military, six years after its own founding. The PLA, under the leadership of the CPC, fought numerous battles and wars, and through an arduous struggle of 22 years defeated enemies from both within and outside the country and founded the People’s Republic of China on October 1st, 1949. Since then, the PLA, closely linked to the Party, acted and fought under the absolute leadership of the Party, firmly advancing under the banner of the Party, and unswervingly following the development pace of the Party and people, has been the staunch pillar of the people’s republic, a great wall of steel in defence of the motherland and an important force in socialist construction. History has proven again and again that the Party’s absolute leadership over the military is the root and soul of the PLA. The PLA will always follow the Party’s lead, and focus closely on realizing the Party’s goal of building a strong military in new era, namely building the PLA into world-class armed forces, by which it can fight and win, and maintain excellent conduct. The PLA will always stay true to its original aspiration and founding mission with tireless efforts, resolutely safeguard national sovereignty, security and development interests, and boldly advance toward fulfilling the Chinese Dream of the great rejuvenation of the Chinese nation.

As a common sense, the PLA firmly guards China's path of peaceful development and pursues a national defence policy that is defensive in nature. Since modern times, the Chinese people have suffered much from aggressions and wars, thereby cherishing more the value of peace. Since the founding of the People's Republic of China in 1949, the PLA has never initiated any war or occupied any inch of another country's land. The building and development of China's national defence and armed forces is entirely driven by the need to safeguard China's national sovereignty, security and development interests, not targeting any 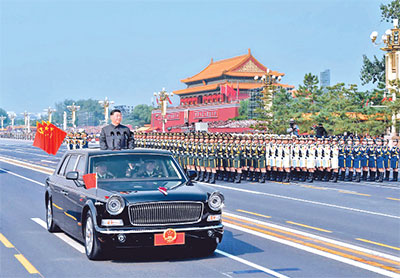 country or not posing threat to any country. It is worth noting that China is committed to building an amicable relationship with its neighbours and peaceful resolution of disputes over territory and maritime demarcation through negotiation and consultation. China has settled its border issues with 12 of its 14 land neighbours and signed treaties on good-neighbourliness, friendship and cooperation with 8 countries on its periphery, all by negotiation and consultation instead of wars or violence, which set a rare and significant example for dealing with the relationship between neighbouring countries. Moreover, China voluntarily reduced the size of its armed forces several times, signed and joined dozens of multilateral treaties on arms control, disarmament and non-proliferation, such as the Treaty on the Non-Proliferation of Nuclear Weapons, which is now severely threatened by the AUKUS pact. It is not by engaging in military expansion or colonial plunder that China has grown from a poor and weak country to the world's second largest economy. China will unswervingly pursue a national defence policy that is defensive in nature; never follow the beaten track of previous powers seeking hegemony. No matter how it might develop, China will never seek hegemony, expansion or spheres of influence.

The PLA is also a staunch force for world peace, stability and the building of a community with a shared future for mankind. China has always resolutely safeguarded the UN-centred international system and the basic norms governing international relations underpinned by the purposes and principles of the UN Charter, and worked with countries around the world to uphold multilateralism, equity and justice. Just like Bangladesh, our close friend, in the new era, to contribute to building a community with a shared future for mankind, the PLA has taken concrete actions to safeguard world peace and actively participated in the UNPKOs, bringing greater confidence and hope for peace and development to areas beset by conflict. China has been the second largest contributor to both peacekeeping assessment and UN membership fees, and the largest troop-contributing country (TCC) among the permanent members of the UN Security Council. Nowadays, Chinese peacekeeping troops have expanded their composition from single service to multiple military branches, enabling Chinese peacekeepers to perform diverse tasks in addition to enabling functions, also extending the objectives of China's peacekeeping efforts beyond conflict prevention to building lasting peace. Over the past 30 years, China's armed forces have resolutely delivered on the purposes and principles of the UN Charter, and sent over 40,000 peacekeepers to nearly 30 UN peacekeeping missions. They have faithfully performed their duties and made a positive contribution to world peace and common development. Since December 2008, more than 40 convoys, normally consisting of three to four ships, and more than 30,000 soldiers, have carried out more than 1,500 vessel protection operations, providing security protection for over 7,000 ships, with more than half of the escorted being foreign or WFP ships.

Meanwhile, as the armed forces of a responsible power, the PLA takes an active part in the international humanitarian assistance and disaster relief. Military professionals are dispatched to conduct disaster relief operations in affected countries, providing relief experience, materials and medical aid. For example, the PLA Navy's hospital ship Peace Ark has visited more than 40 countries and regions including Bangladesh in 2010 and 2013, having provided medical services to over 230,000 people all over the world. Since the outbreak of Covid-19 pandemic, PLA has faithfully implemented the concept of building a community of common health for mankind proposed by President Xi Jinping, and in an effort to protect the health and life of people on the planet, has deepened cooperation with foreign armed forces in Covid-19 prevention and control, making important contributions to the building of a community of common health for mankind. So far, the PLA has sent medical expert teams, provided assistance materials including face masks, ventilators and Covid-19 vaccines, and held on-line experience sharing meetings with many international organizations and friendly countries including Bangladesh, contributing positive energy to the joint efforts of the international community in combating the rampant pandemic.

As President Xi Jinping points out, China has always been a builder of world peace, a contributor to global development and an upholder of the international order. History has proved and will continue to prove that the PLA is a strong pillar for safeguarding China's security, and a key force for protecting the peace and development in the region and beyond. Looking ahead, the PLA will firmly follow President Xi Jinping’s proposal of the “Global Security Initiative” at the opening ceremony of the Boao Forum for Asia (BFA) Annual Conference 2022, continue to advocate common, comprehensive, cooperative and sustainable security, perform the international duties which are required as the armed forces of a big country, and make greater contribution to the building of lasting peace & universal security and the building of a community with a shared future for mankind. Under the strategic guidance of President Xi Jinping and Prime Minister Sheikh Hasina, the relations between China and Bangladesh have been upgraded to a strategic cooperative partnership in 2016, which has promoted and witnessed bilateral exchanges and cooperation to a new stage of rapid development, injected new impetus into economic and social development in both countries, brought more benefits to people of China and Bangladesh, and also ushered in new development opportunities for the relationship between the two armed forces. It is highly expected that the PLA and Bangladesh Armed Forces continue to strengthen exchanges and cooperation, and jointly write a new chapter on safeguarding world peace & development, and building a community with a shared future for mankind!

H.E. Mr. Li Jiming is the Ambassador of the People’s Republic of China to Bangladesh