Bangladesh all-rounder Shakib Al Hasan is all set to play the two-match series opener against Sri Lanka at the port city today despite no kind of clarity regarding his current fitness.

Shakib, who joined the teammates in Chattogram on Friday after getting a corona negative report, hogged all the spotlight during the team’s last training session on Saturday ahead of the opening Test.

The veteran’s name has been in the air since he was named in the first Test squad.

His testing corona positive after arriving from the United States effectively ruled him out of the first game. 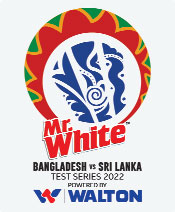 However, the drama didn’t end here as the 35-year old suddenly received a negative test report that brought him in contention to play the opening Test at the Zahur Ahmed Chowdhury Stadium.

The all-rounder didn’t seem to be at his fluent best in the nets during his first training session with the teammates in Chattogram on Saturday.

It looked like he was struggling in the nets considering he was out of cricket for a while (he played the last competitive cricket during the last Dhaka Premier Division Cricket League on April 28).

It was evident that he just tried to see whether he’s having perfect hand-eye coordination in the nets against the throwers and spinners along with lone pace bowler Mohammad Saifuddin, who was another surprise considering he’s not part of the Test side.

There were times when he tried to break the shackles by going for big shots but he mistimed more often than not and when he was struggling to middle the ball, batting coach Jamie Siddons urged him to take his elbow in line of the ball along with his body.

Given how things have changed dramatically, it will be exciting to see whether he will be at his best when he takes the field although skipper Mominul Haque was positive about his comeback.

“From what I have seen, he batted really well. I think he will play. The good thing about Shakib bhai is that he is psychologically very strong. If he wants, he can play the game despite the adversities,” said Mominul, who is expecting the experienced campaigner to play his first Test in 2022.

Shakib, who played his last Test against Pakistan last year, skipped the New Zealand Test series while he missed the South Africa Test series due to his family emergencies.

“He was prepared to play the South Africa Tests but due to family problems, he had to miss that series. He was also doubtful in this series after being contracted Covid-19. But now, he has recovered from it and I think he is desperate to play,” Mominul added.

The Daily Sun learnt that Shakib didn’t have any fitness test ahead of the series opener, a prerequisite of making him available for the game.

“It’s too hot and he batted so we didn’t take any fitness test,” said a member of the team management, implying that they’re selecting him on the back of the verbal assurance from Shakib himself.

Shakib’s decision came as a big blow for head coach Russell Domingo as he insisted on Friday that he is apprehensive to play a 50-60 percent fit Shakib.

The way the Shakib fitness issue is handled by the board, it was clear that the team management didn’t dare to differ with the BCB boss Nazmul Hassan Papon as he stated that they can’t say no to Shakib if he wants to play and it put the whole system under question.