Eid in a New-normal Bangladesh

Eid-ul-Fitr, one of the two biggest Muslim festivals, the other one being Eid-ul-Azha, is over and life is gradually returning to normal. Following the two years disruption of the festival due to the pandemic this year’s Eid-ul-Fitr came with some difference, messages and characteristics. Virtually the last two Eids saw some extraordinary situations, not only in Bangladesh but also around the world. The same was true for other religious festivals too. The situation was so abnormal that even the government of the Kingdom of Saudi Arabia had to shut down or curve the Umrah for foreigners,  though usually performed throughout the year but by a larger number of pilgrims during the Eid-ul-Fitr and the annual Hajj.  Subject to sighting of the moon this year Eid-ul-Azha is expected to be celebrated on 9 July corresponding to 8 Dul Hajj, 1443 Hijri. Usually during the Eid-ul-Azha approximately more than five million people perform the Umrah though this year the number was put at 4 million by the Saudi Government. The number was lower due to some restrictions put by the Saudi Government.  Usually the Saudi government puts a cap as to how many people can perform annual Haj and in the pre-pandemic year of 2019 2.5 million people performed the rite. Usually both the occasions pumps in staggering amount of revenue in Saudi economy. According  to the official estimates, both Haj and Umrah pilgrimage add an estimated US$ 12 billion a year to Saudi’s GDP, which is second largest revenue generator for the Kingdom after hydrocarbon which about 20  percent of the desert Kingdom’s non-oil GDP and 7 percent of total GDP. During the two pandemic years because of the restrictions put on the pilgrimages and demand for oil dipping all time low Saudi economy virtually collapsed. Now the economy is showing signs of strong growth and is expected to grow 7.7 percent this year from 3.2 percent last year helped by higher oil prices and on a robust non-oil sector. The disruption of oil exports from Russia because of its war with Ukraine the Kingdom may see more growth in its oil revenue.

Bangladesh is a unique country in the region as the country’s non-agriculture sectors are virtually concentrated in large cities, primarily in Dhaka and Chittagong. People usually flock to these cities in search of jobs or for their professional needs. Dhaka has a population of approximately 20 million people which is larger than the population of about one hundred countries and is considered one of the most densely populated cities in the world. Usually during the two Eids the number of people moving out of Dhaka to be with their extended family members outside the city could be around six to seven hundred thousand. This year the figure reached well above 10.25 million though the number could be even higher. Half a million people went out of the country to spend their vacation of which most, approximately two third, went to India while perhaps for the first time the people of Bangladesh found a new destination to spend their vacation in the tourist heaven, Maldives followed by Thailand, Nepal, Bhutan, Malaysia, Indonesia, Dubai and some even reached out to Turkey which happens to be one of the most exotic destination for tourists that so far remained untapped by the tourists of Bangladesh. 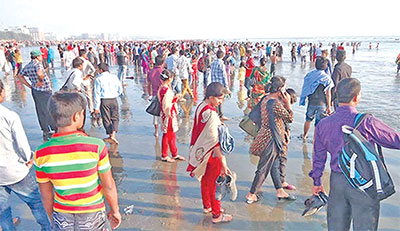 The resumption of tourism to India under new normal conditions from Bangladesh is considered as a boon to Indian economy. If on an average per tourist from Bangladesh spends two thousand US Dollars in India during their stay the amount is substantial. Realizing the gains from Bangladeshi tourists the government of India decided to lift all travel restrictions to India for Bangladeshi tourists. All Indian Visa offices in Bangladesh remained open till late evening. The border check posts were re-opened though a planned bus service from Agartala to Kolkata via Dhaka was called off in the last minutes before the buses were flagged off. A colossal failure of management! According to official sources one out of five foreign tourists to India are from Bangladesh in normal time, which includes people travelling for medical check-up or business. In comparison Bangladesh’s performance in this sector has been dismal. Hazrat Shahjalal International Airport in Dhaka is far too inefficient for handling tourists. The arriving and departing passengers frequently suffer from different types of hassles and non-co-operation from officials at the airports or borders, nonexistence of minimum clean toilet facilities and often the airports are crowded by arriving expatriate workers from Middle East and other countries. There could have been separate counters for this category of passengers with upgraded facilities and separate counters for tourists and others. Many travellers travel to Bangladesh with e-passport but unfortunately none of our international airports have facilities to scan such passports and still the job is done manually by the immigration officials. Though Bangladesh has innumerable tourist spots the country does not have a tourist season and our embassies abroad seldom realize they have an important job to be done, i.e., branding Bangladesh to the outside world.

This year the internal tourism has definitely taken a leap and more than 1.2 million travellers are travelling within the country and as usual their preferred destination is Cox’s Bazar. Unfortunately though the number of tourists to Cox’s Bazar keeps on increasing every year excepting the increase in lodging facilities the destination has little or nothing else to offer to the visitors besides the beaches. There are no facilities for entertainment for visitors after the sun goes down and food prices can be unbelievably high if one is not careful. In most places still the security for tourists is not satisfactory and unfortunately there are reports that this year visitors, including women and children visiting Jaflong in Sylhet bordering the Indian district of Meghalaya were randomly beaten up by some local hooligans posing as volunteers and there were no members of law enforcing agencies present to stop such hooliganism. Such incidents surely will not contribute towards the expansion of internal tourism. It is any body’s guess why one should pay toll for visiting Jaflong.  Maybe someday one will have to pay toll to dip their feet in the waters of Cox’s Bazar or Kuakata.

The authorities should remember that tourists do not usually go to a destination only for walking the beaches or admiring the beauties of nature. They also look for other forms of entertainment. These could include the showcasing of local culture including selling of local handicrafts and other gift items, musical evenings, games for children or movie theatres. On top of everything the visiting tourists should be ensured complete safety and security by the local administration. We can look at India or Turkey. These countries have emerged as major tourist destinations in the world. One could even with limited budged visit these countries and return home with experiences which they usually share with others. No promotion for a destination could be better.  This further boosts these countries’ tourism. It is not that there are no incidents of crime targeting tourists in these countries but usually the perpetrators are punished after summary trial. In Bangladesh in many tourist destinations the hotels and the restaurants, or the people who provide transport service wait to fleece the visitors and seldom is anyone punished for such unethical and criminal activities. Of course there are exceptions but they are far too little and in between.

Eid this year was also a boon for the economy of the country as well. According to official sources received from Bangladesh Bank, approximately 7 thousand crore taka changed hands in this Eid season bringing about a relief to businessman, including the service providers. During this Eid vacation approximately 43 thousand vehicles crossed the Jamuna multi-purpose bridge on last five days preceding the Eid and a total of four crore taka was collected from these vehicles as toll. This is in addition to tolls collected from other exit points from Dhaka. This year the exodus of people from Dhaka for celebrating the Eid was quite satisfactorily managed without any major hassle or incident. The authorities must be congratulated for this feat. Hope the return will also be as smooth and without any untoward incident.

Unfortunately Bangladesh has a class of business men and service providers who, unlike in other countries, always waits for an occasion like Eid to frequently fleece the customers freely in the market jacking up the price beyond any rationale. A dress which may cost no more than two to three thousand taka in India, Thailand or even in Singapore is priced at twenty to thirty thousand taka in Bangladesh during Eid. A sherwani in a Gulshan market was priced at 2.5 lakh taka. This year the case of edible oil and other consumable items’ price skyrocketed beyond the reach of common people. The market is usually manipulated by the importers and wholesalers and many consider this as their legitimate right in a market driven economy. They fail to understand that market driven economy does not mean license to create anarchy in the market. Though some of the agencies of the government were vigilant and took action against some unscrupulous traders those remaining out of this net are too large and they just contributed to misery of the people. Their actions are not only limited to festivals they remain busy throughout the year targeting the common customers.  The new rich hardly notice such manipulations as they have much bigger budget. The common people expect the authorities will be more vigilant in protecting the interest of the common consumers.

On the whole, this Eid played a very important role in injecting blood in the post-Covid economy in Bangladesh and neighbouring countries besides Muslim majority countries. It helped countries like Saudi Arabia and few others besides Bangladesh to make a comeback to its pre-pandemic status and it is expected that the recovery will continue even after the Eid celebrations are over.

Wishing all those who will return to workplace after the Eid a safe return and wait for the coming Eid vacation to begin with even better conditions!