The Independence Cup and Federation Cup champions Dhaka Abahani Ltd tasted their first defeat in the current season after they conceded a 2-3 loss to Chittagong Abahoni Limited during their sixth match of the ongoing Bangladesh Premier League in Sylhet on Tuesday. 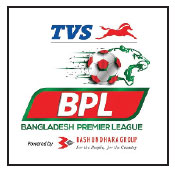 Chittagong Abahoni’s South African forward William Twala and Afghan midfielder Omid Popalzay then scored one each in the 37th and 64th minute respectively that sealed the fate of the match before Dhaka Abahani’s Brazilian midfielder Raphael Augusto reduced the margin of the defeat in the 89th minute.

It was Dhaka Abahani’s first defeat in 15 matches this season.

With the day’s victory, Chittagong Abahoni moved to fourth in the points table with 12 points in six games while Dhaka Abahani remained at second with their previous credit of 13 points from six matches.

Meanwhile, in the day’s other match, Saif Sporting Club outplayed Swadhinata Krira Sangha by 5-1 goals at the Muktijuddho Smriti Stadium in Rajshahi.

Saif’s Nigerian forward Emeka Ogbugh grabbed a hat-trick in the match while Rwandan defender Emery Bayisenge and Uzbek midfielder Asror Gafurov scored one each in the 15th and 47th minutes of the game.

With the day’s win, Saif SC earned 10 points while Swadinata KS remained with their previous credit of four points.

Mominul satisfied with the result

‘Lot of things depend on Fizz’s Test return’

Main strategy was to keep a clean sheet against Maziya: Bishwanath

We knew the result from day one: Dhananjaya

Eintracht Frankfurt players celebrate after winning the UEFA Europa League against Glasgow Rangers in Seville on Wednesday. Frankfurt defeated Rangers 5-4 on penalties to win tournament after the final in Seville finished 1-1 at the end of extra time. –AFP PHOTO