Bone-chilling cold coupled with persistent dense fog has paralysed normal life both in urban and rural areas of the country, causing immense sufferings for the underprivileged elderly people and kids.

Our correspondents from a number of northern districts have reported that the poor people of river basin char areas are becoming the worst sufferers as they can hardly afford warm clothes.

The country’s lowest temperature was recorded at 6.1°C in Rajarhat upazila of Kurigram on Friday.

The Bangladesh Meteorological Department (BMD) in its Friday morning bulletin said a fresh spell of mild to moderate cold wave is sweeping over Rangpur and Rajshahi divisions along with Jashore, Kushtia, Gopalgonj, Tangail, Mymensingh and Moulvibazar, and it may continue and spread further.

People of these regions are being forced to limit their outdoor activities.Farmers and day labourers, while talking to the Daily Sun, said they are struggling to run their families as they cannot go out of their houses to earn their daily bread.

“I needed to go to the field for planting Boro paddy seedlings in the weeping water but the biting cold has made me bound to stay at home. It is not possible to work long hours in such cold weather,” said Abdus Salam, a farmer of Durgapur village inUlipur upazila under Kurigram district.

Many distressed people are trying to fight the extreme cold with the heat from burning straw and old rubber tyres. Animals in sheds are covered with old sacks.

The sun remained invisible in Rangpuron Friday. Buses, trucks and other motorised vehicles have been operated turning headlights on amid dense fog but received less passengers. The divisional city recorded 8.2°C in the morning.

Sale of warm clothes, room heaters, and other winter-related products has increased due to the biting cold.

Hospitals are witnessing a sudden rise in the number of patients.Children and the elderly are being affected with various cold-related diseases like fever, cough and cold, diarrhoea, dysentery, bronchitis and asthma.

“Around 20 percent of patients admitted to different hospitals in our district are suffering from cold-related diseases and more than 65 percent of them are either children or elderly people,” said Dinajpur’s Civil Surgeon AbdusKuddus.

Like the residents of northern districts, people of Dhaka are also experiencing the adverse effects of severe cold.

While visiting some stations, markets and footpaths in the capital at midnight, this correspondent found many floating people there shivering with cold.

Winter has turned unforgivably harsh for them as they are being compelled to spend long foggy nights with no warm clothes to shield them from the bone-chilling cold.

Around 15 to 20 homeless people were seen preparing to sleep in a row on the footpath on Dhaka University campus.

Wrapping with a mosquito net and quilt, Khodeza Begum, a septuagenarian woman, was found trying to protect herself from the cold there.

“I’m alone and helpless. There is no one to provide me witha warm cloth or blanket. The icy wind of winter has made the life miserable for poor people like us,” she said.

A large number of floating people sleep in Kamalapur Railway Station every night. Some homeless people beside a railway platform were seen huddling around fires lit with dry leaves, wearing torn clothes to protect themselves from the chill.

JakirHossain, a nine-year-old mineral water and juice seller at the station, said, “I have only one piece of warm clothing. Therefore, I try to find a place to sleep where the flow of wind is much less. Sometimes I light a fire to get some warmth.”

Winter forces these people to make difficult choices. If they buy warm clothes, they will have nothing to eat for survival, some floating people said.

Officials of the Ministry of Disaster Management and Relief and the Ministry of Social Welfare have said the government has been distributing blankets among the cold-hit poor people across the country.

Many poor people, however, complained that the government assistance is too scanty to protect them from the cold.

Rights activists stressed the need for more support from the government as well as the affluent people in reducing the sufferings of the floating people. 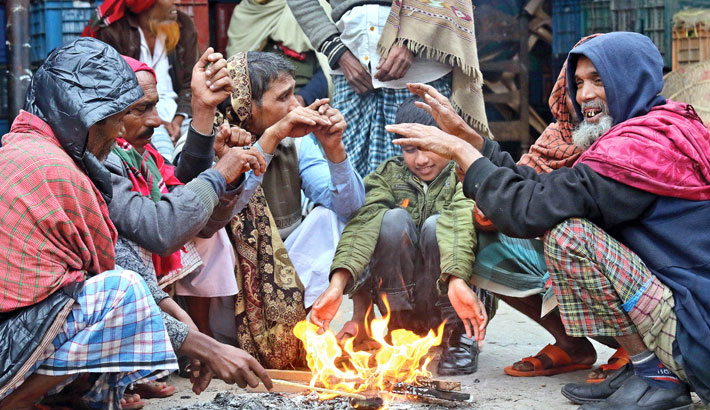