Information – a Form of Currency in Cashless Society

For ages, people used the barter system to fulfil their needs. People used to get rice by exchanging meat but it was not an equal exchange. To overcome this problem, humans invented coins. At first, humans used to use rare metals like gold as a form of currency. Soon they realised, the exotic metal they were using as currency was rare and difficult to excavate. Because of these problems, humans created the paper currency, but even that has its own drawbacks. The biggest problem being lack of security and that it shreds easily. When you carry money on your person, there is a concern of security. You won’t be able to carry too much money with you at a time. Keeping money at a safe place was a big concern, from which emerged the idea of banking. The bank was originally established for the security of money or other valuable assets. However, because of the problems with paper notes such as lack of security, inconvenience of carrying a large amount of money at a time and the possibility of it getting ruined, again pushed humans to come up with a better solution.

We all are now familiar with SMS banking, internet banking, debit card, credit card, crypto currency and a bunch of other innovative solutions for altering paper notes. 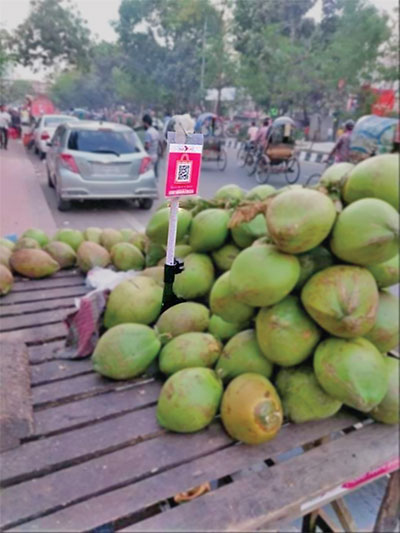 All the forms are intangible; rather they are more of an informative method for exchanging currency. Now, when someone gets his salary it’s just a message to his phone! Thanks to the debit card, credit card and other mobile banking services; the owner of the money doesn’t even have to take the cash out of the bank. Even in this era a person can almost live with his debit and credit card without even touching a bit of coin or paper printed notes in most of the developed countries. Even the transportation system such as Uber takes money through different mobile banking forms. So, carrying the notes has decreased significantly in the past 10 years among wealthy people in Bangladesh. The recent Covid-19 pandemic, gave a boost to the usage of digital currency. According to Light Castle Analytics Wing, “The start of the pandemic led to mass scale lockdowns across the town and this led to more and more people relying on contactless methods to pay for essential products and services. This ease of transaction helped the digital payment ecosystem of Bangladesh reach new heights.”

On the other side of this spectrum, my concern is; the currency we are using is just a bunch of information that says that your account has 50,000 taka or so. This currency medium is already revealing its drawbacks like digital theft, identity theft and hacking. “The biggest fear is the risk of identity theft. Since we are culturally not attuned to digital transactions, even well-educated people run the risk of falling into phishing traps. With the rising incidence of online fraud, the risk of hacking will only grow as more people hop on to the digital platform,” says Manoj Nagpal, CEO, Outlook Asia Capital.

However, if everything goes on like this, one day the currency will be announced as information! Neither paper notes nor coins will be produced anymore. Because of the growing environmental concerns, as we need trees for making paper notes, when there is a convenient alternative giving us more safety, mobility, accessibility and environmental friendliness with digital currency, why should we use the paper form?