Different sports federations of the country on Thursday celebrated the 50 years of Bangladesh’s Victory, the most precious moment of the Bengali people as the country was liberated from the Pakistani occupation forces on the day in 1971 after a nine-month-long bloodstained war.

The Bangladesh Cricket Board organised a traditional exhibition cricket match on the occasion of the 50th Victory Day at the Sher-e-Bangla National Cricket Stadium in the capital.

Jewel XI skipper Habibul Bashar made the highest 29 not out while Mushfiq Babu added 27 runs for his side.

Athar was adjudged the player of the match for his brilliant innings.

BCB President Nazmul Hassan Papon graced the occasion as the chief guest and later he distributed awards during the prize distribution ceremony.

BCB boss also met the U-19 cricketers and gave his best wishes to the junior Tigers for the upcoming Under-19 Asia Cup.

“We want to remember their names who sacrificed their lives in the Liberation War. We got independence through their sacrifices and with their vast contributions hence Bangladesh were able to produce several quality players like Shakib, Mashrafe, Ashraful, Tamim, Mushfiq, Mahmudullah and Mustafiz,” BCB Cricket Operations Chairman Akram Khan told the media after the match.

“Bangladesh cricket is gradually improving day by day. We hope that Bangladesh will bring more wins for the country in the future,” he added.

After the match, BCB President Nazmul along with other BCB directors, former cricketers, women’s cricketers and U-19 cricketers joined Prime Minister Sheikh Hasina’s oath programme as part of the celebrations of the Father of the Nation Bangabandhu Sheikh Mujibur Rahman’s birth centenary and the Golden Jubilee of Bangladesh’s Independence.

Bangladesh T20 skipper Mahmudulah represented the men’s national team on the occasion in the absence of national cricketers who are currently in New Zealand to play two-match Test series.

“We played the World Cup qualifiers keeping in mind December 16 and the 50th anniversary of the Victory Day as the BCB gave us a soft reminder to us before going to play the World Cup Qualifiers in Zimbabwe. This desire gave us a different kind of energy. Luckily, we were able to execute it well and booked the World Cup spot for the first time ever,” Bangladesh women’s cricket team player Jahanara Alam after the programme.

Bangladesh national cricket team, which is currently in Christchurch, shared a video where they were seen standing together with the national flag in front of them and singing the national anthem as part of their celebration of the Victory Day.

The former Bangladesh national players divided into two teams - Red and Green - took part in the match that finished in a goalless draw at the artificial turf of the BFF premises in Motijheel.

Besides, the Directorate of Sports organised a daylong sports competition and cultural program marking the day at the Government College of Physical Education premises in Mohammadpur.

Moreover, the Bangladesh Archery Federation and the Basketball Federation Bangladesh have also organised separate tournaments to mark the V-Day. 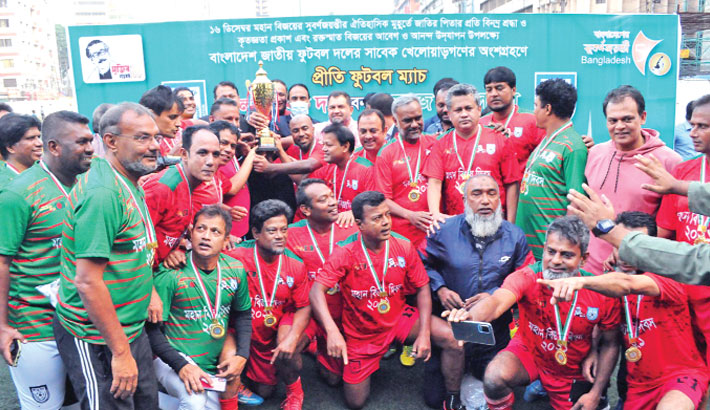 The former Bangladesh national footballers pose for a photo after a friendly match at the artificial turf of the BFF premises in Motijheel on Thursday.     – BFF PHOTO