Opener Sharmin Akhter smacked the first-ever century for Bangladesh in ODI cricket as Bangladesh dealt the USA a 270-run humiliation in their second Group B match of the ongoing ICC Women’s Cricket World Cup Qualifiers at Sunrise Sports Club ground in Harare, Zimbabwe on Tuesday. 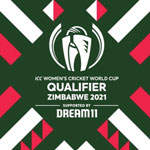 With their back-to-back win, Tigresses increased their hopes to book their place in the main event for the first time in their cricketing history.   Bangladesh commenced its World Cup qualifiers campaign with a victory against Pakistan. They will now face Thailand and the hosts Zimbabwe on November 25 and 29 respectively in their remaining Group B matches. Batting first, Bangladesh posted a colossal 322-5 in 50 overs with Sharmin and Murshida Khatun’s commanding opening stand and Fargana Hoque’s 67 from 62-ball blitz.

In reply, Salma Khatun, Fahima Khatun and Rumana Ahmed claimed two wickets apiece to bundle out the USA for just 52 in 30.3 overs.   The USA could not recover from a top-order meltdown during a run chase and kept on losing wickets at regular intervals to slump to their humiliating defeat in their first match of the tournament.

It was an abysmal batting performance by the USA with only two batsmen who could reach the double-digit.

Tara Norris (16) and Moksha Chaudhary (8) chipped in with a 27-run stand but could only delay the inevitable.

Earlier Put into bat first, Tigresses rode on a 96-run dominating opening stand between centurion Sharmin Akhter and Murshida Khatun before Sharmin and Fargana Hoque were involved in another substantial partnership of 137 to post an imposing 322 for five in 50 overs.  Sharmin top-scored an unbeaten 141-ball 130 while Fargana provided a good supporting role with 67 off 62 balls.

With the in-form Bangladesh batting line-up, USA bowling looked more erratic than before and runs were coming thick and fast. There were huge partnerships from the Bangladesh top order, with Sharmin leading the way for the umpteenth time.

Sharmin and Murshida Khatun put on display an incredible dominating show which to an extent demoralized the USA. Skipper Nigar Sultana also made 33 in the middle to share 48 runs with Sharmin.  Sharmin’s knock came off just 141 balls as he punished the bowlers with 11 fours and Fargana managed his vital innings with six fours. Sharmin’s opening partner Murshida’s 57-ball 47 was laced by five fours.

The Bangladesh batsmen did not spare a single USA bowler as it rained boundaries when they were batting in full flow.