Country comes to a halt

The public transport network has come to a halt as the transport owners and workers went on a nationwide strike for an indefinite period on Friday to press for their demand, causing untold sufferings for commuters.

As per their previous announcement, the transport owners and workers enforced the strike at 6am demanding that the recent hike in diesel price be cancelled or transport fares be increased.

A severe public transport crisis was created in the capital and the rest of the country as buses remained off the roads due to the strike, forcing many to struggle to reach their destinations. No inter-district buses left the capital’s three inter-district bus terminals -- Gabtoli, Mohakhali and Sayedabad -- on Friday.

CNG-run auto-rickshaw drivers and rickshaw-pullers were charging excessive fares from passengers taking the advantage of the situation, alleged commuters.

No trucks and covered-vans were also seen plying the roads anywhere in the country. 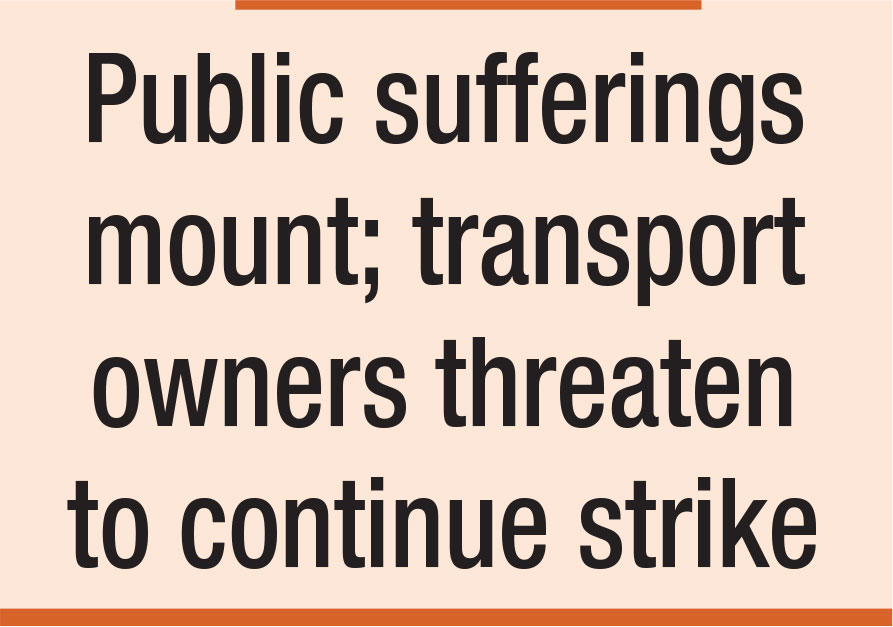 However, a handful of state-owned BRTC buses were seen running on the Gulistan-Farmgate-Mirpur route. These buses were crammed with passengers. Even many were dangling from the bus doors. Many commuters expressed anger for their sufferings.

Government job seekers, who came to the capital from different parts of the country to sit for different recruitment tests faced trouble.

They struggled to find a vehicle to reach their respective test centres in the morning. Besides, it is difficult for them to return home after the tests due to the transport crisis.

Ashraf Ali, a BRTC passenger travelling from Farmgate, said if the public transport is stopped, the common people suffer the most.

In many city intersections, huge people were seen waiting for hours for the public transport throughout the day.

“I walked for a long time to reach Farmgate and waited for a bus to go to Gulistan. After half an hour, a BRTC bus was found, but there was no way to board it except to hang on to it,” Kamal Hossain, a student, said.

Many commuters faced difficulties due to lack of public transport. Most of them said they were not aware of the strike. No buses or goods-laden trucks were seen operating on Dhaka-Aricha highway. The movement of other diesel-powered vehicles was also halted.

However, there was no bar to the operation of private cars, CNG-run auto-rickshaws, motorcycles, rickshaws and vans on the roads.

A similar situation prevailed in other parts of the country, including Chattogram, Cumilla, Narayanganj, Rangpur and Khulna with buses and trucks being off the roads.

In Chattogram, commuters were seen waiting at different bus stoppages in the city since the morning. However, not a single bus was seen to appear to lift them.

Transport owners vowed to continue the strike until their demand is met.

Bangladesh Bus-Truck Owners Association, Bangladesh Road Transport Workers Federation and Bangladesh Truck-Covered Van Drivers Union said they will not suspend the strike until the hike in the fuel price is cancelled or transport fares are increased.

Transport owners and workers claim they would not be able to run their business with the current fare system due to the hike in fuel prices.

“The authorities haven’t met our 10-point demand. They did increase the toll. But now they’ve hiked the fuel price by Tk 15 per litre. What else can we do? We have no other option,” said a transport leader.

Earlier on Wednesday, Bangladesh Petroleum Corporation (BPC) raised the prices of diesel and kerosene at the retail level by Tk 15 per litre to keep them in line with the global market.