The mat laid under the vast canopy set up at the Sheikh Russel Krira Chakra Limited Complex in the capital’s Bashundhara Residential Area was full of attentive child painters.

There was no binding. Children aged between 6 and 10 were allowed to imagine and visualise whatever they like about Sheikh Russel, the youngest child of Father of the Nation Bangabandhu Sheikh Mujibur Rahman and Bangamata Sheikh Fazilatunnesa Mujib.

He also cut the birthday cake along with the three winners of the competition.

Russel was born on October 18, 1964 at the historic Bangabandhu Bhaban at Dhanmondi-32 of the capital.

If Russel had survived, he would have turned 57. But age turns into a mere number for dead people. 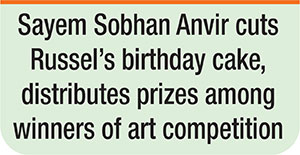 Since he was assassinated along with most of his family members on the fateful night of August 15, 1975, his age was stuck at 10 years and 10 months.   Over 200 children who took part in the competition were of his age. After being stranded inside their houses for over one and a half years due to the coronavirus pandemic, when they stepped into the club field with their paint brushes, colours and sketch boards, their faces were glittering with joy of relief and creativity.

Evaluating the artworks of the child artists, chief judge Imdadul Haq Milan, also a director of the club, announced the names of the three winners. Minhaj Zaman, a fourth grader of Adarsha Shishu Govt Primary School, got the first prize of Tk 100,000 while Mithila Bhowmik, a Class-V student of Viqarunnisa Noon School, and Shreyoshi Saha, a fifth grader of Narayanganj Ideal High School, got the second and third prizes of Tk 50,000 and Tk 25,000 respectively.

Hundreds of guardians present on the club premises appreciated the initiative.

“I and my husband often tell our son about Sheikh Russel and his family members. This competition has offered a great opportunity to him to paint those stories through his imagination. I thank the club authorities,” said Anamika Majumder, a guardian.