Science and Technology Minister Architect Yeafesh Osman confirmed this to the Daily Sun, saying that the inauguration would be held on 10th of this month. 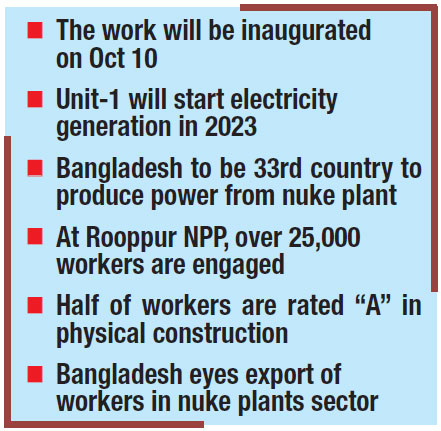 The vessels provide one of several barriers that keep radioactive material out of the environment.

The government is expected to start commercial operation of the country’s maiden nuclear power plant in 2024 after a pre-commissioning in late 2023.

He hoped Bangladesh would also be able to export manpower for physical construction of the nuclear power projects in the coming days.

The construction work continued round the clock even during the pandemic, the minister said.

He said the site authorities had taken all precautionary measuresfollowing the COVID-19 guidelines.

“We expect to complete the project as per the schedule,” the minister said.

While responding to a question, he said, “Some people raised questionsabout continuation of the construction work during the COVID-19 pandemic. But it proved to be successful and was also able to feed a huge number of people during the pandemic,” Yeafesh Osman said.

About environmental issues, he said only a gram of uranium is used to produce heat, which is equivalent to 27 mounds of coals. “The project is environment friendly.”

Bangladesh will be the 33rd country in producing electricity from nuclear energy, the minister said.

International Atomic Energy Agency (IAEA) members already praised the Rooppur plant and its progress. When contacted, a senior official also confirmed that the installation of the RPV wouldbegin in mid-September. The official said Prime Minister gave her consent to open the work virtually on October 10, 2021.

Bangladesh is implementing the Rooppur NPP at an estimated cost of Tk 1.13 lakh crore.  The work of the unit-1 started on November, 2017.

Rosatom, the state atomic energy corporation of Russian Federation, signed an agreement with the Bangladesh government to build the nuke plant at Rooppur in Pabna'sIshwardi in February, 2011.

The RPV berthed at Rooppur river port jetty through a special barge in late November, 2020, an official said.

The Volgodonsk branch of JSC “AEM-technology” of Russia already shipped a set of steam generators for the under-construction Rooppur NPP.

The first item was dispatched together with the Reactor Pressure Vessel. Two more steam generators were shipped in September, 2020.

The last of the four steam generators was transported from the plant to a special berth, where three items with the total weight of more than 1000 tons will be loaded onto a barge.

The equipment was transferred to Novorossiysk and then transported to Bangladesh by specialised mother vehicles. The sea route will be about 14,000 kilometers long.

The Steam Generator belongs to products of the first safety class. Its diameter is 4 meters; its length is about 14 meters.

The weight of the equipment is 340 tons. The Steam Generator Vessel is a horizontal cylindrical vessel with two elliptical Heads, in the middle part of the vessel there are Headers for supplying and removing the hot coolant.

In the lower part of the Steam Generator Vessel there is a heat-exchange surface which consists of 11,000 stainless tubes with a total length of about 130 km. The equipment of every unit includes four steam generators.

The government will recruit a total of 664 officials by 2021 in two phases to operate, maintain and manage the plant in Pabna, official sources confirmed.

According to the sources, Nuclear Power Plant Company Bangladesh Limited is installing 74 installations and infrastructures including reactor building, reactor auxiliary buildings, turbine buildings, normal and power supply buildings for unit-1 and unit-2 for the NPP.

The power plant has been designed and is being constructed as per the Russian project. The plant will consist of two units with the capacity of 1200 MW each, equipped with VVER reactors of the 3+ generation.

LNG re-gasification capacity to be cut by 100mmcfd in winter

Bangladesh for green and innovative technologies