Demand for posthumous trial of Zia gets louder

Laila Anjuman is now in her sixties. Her husband was Flight Sergeant Tofazzal Hossain. He disappeared from the cantonment after one and a half years into their marriage. Laila said in the name of suppressing a so-called rebellion, her husband was hanged during the regime of Ziaur Rahman.

Laila turned up at the Jatiya Press Club (JPC) in the capital on Saturday to press for her demand to locate her husband’s grave among others. “I was married off when I was in Class-X. I lost my husband when my baby was only six months old,” she said in a tearful voice.

“My child could not even call him father. Even, the child didn’t get father's care. The hardest part was that I couldn’t even show the child of my husband’s grave.”

Not only Laila but hundreds of families like her showed up at the JPC to take part in a discussion to press for the same demand. The programme turned into a meeting of mourning.

One of them, Rokeya Begum, said, “After losing my husband, I took a job in a garment factory. I don’t feel ashamed of saying this.”

Monir Hossain, son of Akbar Hossain who was hanged by Zia, said, “My mother was not even given a place in my grandfather’s house. She lost her husband. She was insulted in many ways. She was called unlucky.” In 1977 when Ziaur Rahman was in power, a coup took place in the Air Force in late September. In the name of suppressing that coup, about 1,400 members of army and air force were killed by hanging and at firing squad. But no one knows where the bodies are buried. Besides, many military personnel were jailed and sacked by ‘killer’ Ziaur Rahman.

The family members of the military personnel, who had fallen victim to ‘killer’ Ziaur Rahman’s conspiracy in 1977, demanded his posthumous trial for killing their innocent near and dear ones.

They urged the government to declare the officials of the armed forces as innocent since they were persecuted illegally by ‘killer’ Ziaur Rahman as part of a heinous conspiracy.

The speakers said they were killed on the one hand and the families did not get government assistance on the other hand. Many people from different professions expressed solidarity at the discussion meeting.

Justice AHM Shamsuddin Choudhury Manik said the law was enacted after the execution. The bodies of those killed were not returned to their families. Such a precedent can be found nowhere in the world.

He said, “Pakistan was the god of Ziaur Rahman. So, he killed hundreds of freedom fighters for his lord. Many people today believe that Ziaur Rahman didn’t participate in the Liberation War. He was a Pakistani spy.”

“I would like to make a demand: I think a strong commission of inquiry should be formed to investigate this matter. Because, the nation wants to know why and how they were hanged. Let each of them be listed. Where are their graves? Because we have a right to know,” said Justice AHM Shamsuddin Choudhury Manik.

“Ziaur Rahman should be tried. The crime he committed must be acknowledged,” he added.

The family members of the victims announced a seven-point demand, including trial of Ziaur Rahman.

They also urged the government to provide salaries, pension and other benefits payable for the victims. The families also demanded that the government trace the graves of the victims and install plaques inscribed with epitaph on their tombs. 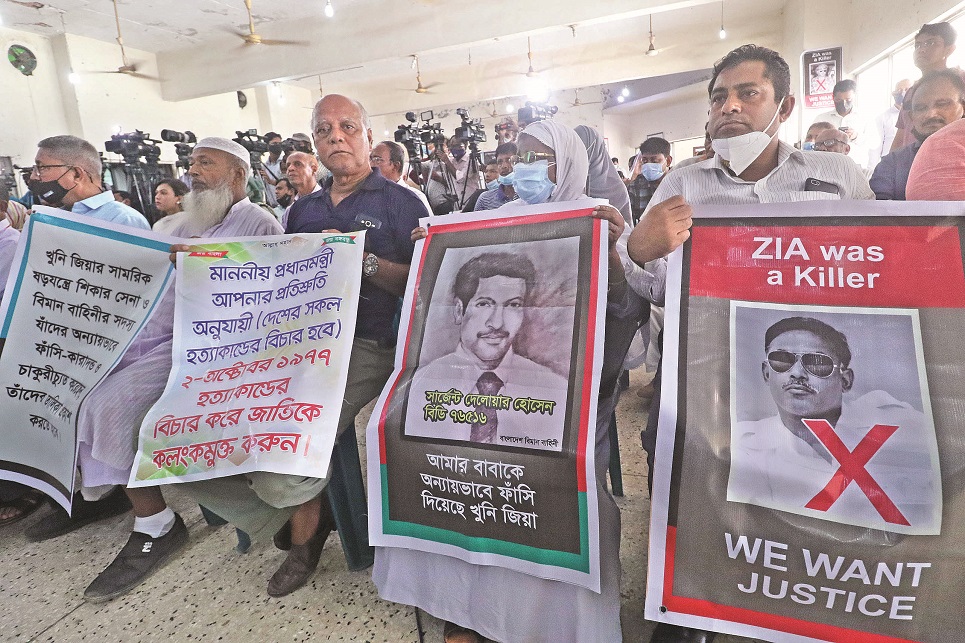 Demand for posthumous trial of Zia gets louder

Over 2m students to sit for SSC exams