Recently there have been a lot of talks about Nagad. I have been hearing discussions, criticism, and wondering about the motive behind all these. And observing the total scenario, I am noting less but astonished.

With the observation in the last few days, the conclusion I have reached is, when the Nagad customers started getting better and cheaper service with money transaction, bill pay etc, that fuelled jealousy into another party.

The situation reminded me of an old proverb - strike while the iron is hot. When the Bangladesh Post Office’s mobile financial wing Nagad should be praised for going to the law enforcement agency following suspicious transaction, rather, for suspending those accounts they are facing propaganda and false accusation by a quarter. And as our social culture, many people are joining this vested campaign just for going with the flow, without even understanding the situation. Not to mention, some people have already lined up for taking advantage of this turbulent situation.

To understand the matter no one needs be a rocket scientist; we just need to go back some years. The core of the problem is a monopoly and dominance that created in the MFS industry in the last one decade and with a jolt by Nagad the monopoly player came out with dirty play. Earlier, following similar strategy, the monopoly player forced many other MFS operators to quit. As a result, the number of licensed MFS came down to half which was 30 at one point. And, those who are still operating are merely surviving, and people almost forgot that there could even be any competition in the market.

And then entered Nagad, with a cost effective and superior service, jolting the monopoly in the market and that’s where the problem rose from. 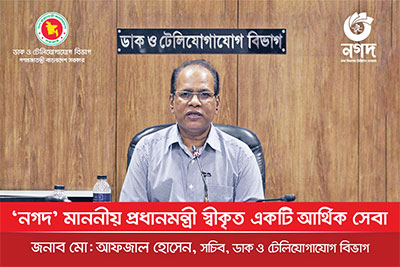 To make things clearer, let’s check the math behind the theory. Send money from person to person is free in Nagad. In cash-out, for every Tk 1,000 the charge is Tk 11.50 in Nagad whereas the monopoly player still charging Tk 18.50 which they started 10 years back. Also in the send money option they are charging Tk 5. So, only for a thousand-taka transaction the difference stood at Tk 12. Now, it maybe will never come to light that how many units of Tk 12 lost in millions of transactions. And those who are supposed to keep such records are apparently passing their time in day sleep.

Who can really tell how many million units of this Tk 12 additional charge is kept within the country and how much of it siphoned abroad. I believe, in the judgement call, customers will decide if they want to keep the money within the country or will facilitate other companies to take this abroad.

Recently in a report of Kaler Kontho, I learned that Nagad users have saved Tk 1,000 crore in last one year due to low cost service. As former banker, it gives a positive vibe that the monopoly in the MFS industry started to break and ultimately the customers is becoming the beneficiary of this. At the same time, due to the competition from Nagad, the monopoly operators started giving some ground and bound to give customers more benefits.

All the symptoms indicate a simple conclusion – it was a case of ego and interest of a big player. The monopoly player now can see cracks in its wall which was done by Nagad’s superior service and people’s unconditional acceptance of the local MFS operator. This is the reason for the recent propaganda against Nagad from within the country and abroad too.

They also questioned a legitimate bond issuance by Nagad, which is getting approval from the securities regulator. The motive is obvious; they don’t want to see Nagad growing strong.

The most astonishing thing is – no one is saying the Nagad bond is s private bond for institutional investors and already those who invested are foreign companies. The bond is not for common public. Is it that difficult to differentiate, one company is bringing foreign investors another sending the money abroad?

Is no one noticing that the Ali Baba is spreading its tentacles over Bangladeshi companies and creating dominance in different industries through internal understanding? I think if such a thing is overlooked now, it will be too late to handle in future.

No one even wonders, the monopoly MFS operator, which was in profit for several years, suddenly came into loss despite increase in customer number, transaction and revenue. Is the regulator or auditors are examining this without bias?

The unfortunate truth of our country is – no one ever asks such questions; that is, why the interest of the country and its citizens becomes a product offered to the highest bidder. This is why never any government service gets due credit or scope, because a group is always ready to kill such attempts at the beginning.

Even after all these, hopes never die. I believe positive energy and good thoughts will find their places in everyone’s heart. The policymakers and the people will finally have to choose if they will be tricked and played or stand for the right cause and serve country’s interest.

The writer is a former Deputy Governor of Bangladesh Bank