Afghanistan, known as “Empire’s Graveyard”, has once again been under the grip of Taliban – the fanatic Islamic outfit who are committed to introducing draconian Shariah laws across the country. That the Taliban have killed human rights activists, liberal writers and artists is also known to us. But now that the last contingent of the US troops is reported to have left Afghan soil, marking the end of a 20 years long war in which the Taliban eventually have come out as victorious party, the most burning question is – what economic scenario is going to unfold in the coming days under the  Taliban regime?

The context of the query has two aspects: domestic and international. In the aftermath of the Taliban takeover, the most important issues that warrant to be expeditiously addressed are: the domestic fragile economic condition of Afghanistan and the role of international community, especially of the United States in the process of restructuring the economy of that country.

Suffice it to say, that Afghan economy presently appears to have been on the verge of collapse. Admittedly, this plight is not the outcome of one day; rather it is a legacy of the past administration over the years. The successive governments that came to power after the fall of the Taliban in 2001 were week, inefficient and corrupt. The two former presidents were outsiders - or expatriates to say the most – having spent a considerable part of their time in the US. As a result, they were a bit devoid of idea about the complex realities of Afghanistan and they failed to symbolize themselves the hopes and aspirations of the people in general. Consequently, they could not build an effective administrative system suiting the needs of their fellow countrymen. For the most part of the past two decades various regions of Afghanistan were not cohesive, rather diverging from the centre. In reality, the governance of some provinces was carried out by a cluster of the Taliban warlords, rendering the central government inefficacious and vulnerable at regional level. 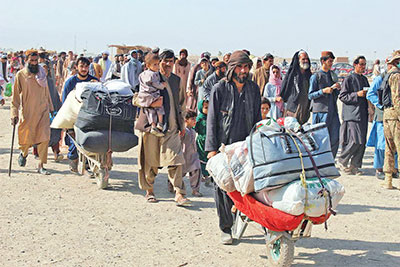 So things happened as feared. The Afghan economy continued to be tottery. Over the past years what could have been attained was not accomplished, as data show.  At present, the gross national product (GNP) of Afghanistan stands at around USD 190 billion, just a little more than the USD 160 billion economy of our Dhaka city. The country’s  legal export of goods and services every year makes up USD 1 billion and every year it imports USD 6 billion worth of goods and services – thus creating a perennial problem on balance of payment.

The production, sale and export of opium have long been playing an important role in Afghan economy. About 80 percent of global opium production comes from Afghanistan. And the revenue generated from it amounts close to USD 7 billion. The illegal opium export by Afghanistan is worth USD 2 billion every year. Therefore, both at micro and macro levels of Afghan economy, the role of opium is worth noting, to say the least.

The other element that plays pivotal role in Afghan economy is foreign aid. Last year, donor community pledged to provide USD 20 billion as aid to Afghanistan. Since 2002, the World Bank has provided Afghanistan with a total of USD 5.3 billion development and emergency relief assistance. The International Monetary Fund (IMF) has earmarked for Afghanistan USD 400 million as Special Drawing Rights (SDR) in a bid to combat Covid-19. It is clear from socio- economic indicators that Afghanistan is now at a critical stage. About 70 percent of its people now live below poverty line (per person earns less than USD 1.9 a day). If the poverty line is pushed to 2 US dollars a day, 90 percent of its people would be poor. Even in this 21st century, the average life expectancy of the Afghan people is only 60 years with mean years of schooling being merely four years. About 55 percent of its people are illiterate.

In Afghan society, the status of women remains very vulnerable one. An Afghan woman, on average, lives up to 62 years – their mean years of schooling are only two years. One out of five Afghan women participates in the labour market. The maternal mortality rate in this country is as high as 683 per 100,000 live birth.

Against the backdrop of these circumstances, the Taliban has assumed power, ousting the US backed Ghani regime. The takeover of power by such a religious bigot group is not presumably acceptable to the world community, as it is going to cripple the already feeble Afghan economy. Western community and international organizations are likely to impose sanction on the Taliban-led Afghanistan. The United States has frozen about USD 10 billion worth of Afghan assets held at various banks in Afghanistan. The IMF has withdrawn USD 400 million worth of SDRs allocated earlier to that country aimed at redressing the Covid-19 induced crisis. The World Bank has not stated anything worth mentioning, on the contrary, it might impose restrictions on its funding to Afghanistan. There has been 20 percent decline over the past four years in the allocation of grants to Afghanistan by the donor community, making the Afghan economy more vulnerable.

Given all these sanctions and restrictions, it is the Afghan people across the country would be hardest hit. Worse still, there may be inflation in the country and the scourge of devastating famine cannot be ruled out.

Till the end of June this year, the foreign exchange reserve at Afghan central Bank stands at USD 366 million which is too small to meet the import bill or demand, leaving its people close to pauperism. Against the backdrop of this gloomy picture, two other things might occur. Because of the imposition of sanction by western economy, the Taliban can increase the production and enhance the volume of the illegal export of opium. Secondly, with the withdrawal of SDR funding by IMF, the Covid-19 situation may worsen.

Presumably, the economic condition Afghanistan under the Taliban rule is set to go from bad to worse. The abject poverty, for sure, will increase the woes of and fragility to any economic shock is likely to escalate manifold, while the infrastructure and technical development of Afghanistan –a key to foster economic prosperity – is likely to be hampered to an extent.  On the whole, the economic landscape of Afghanistan under the Taliban rule seems feeble and vulnerable, let alone promising one at all. Unless and until the world community comes forward to rescue its dilapidated economy, famine deadly diseases pauperism may visit Afghanistan before long and the country may turn into failed state.

The writer is a retired Deputy General Manager of BSCIC