This potato variety can be harvested in 60 days after sowing seeds, much lower than the 90 days needed by other varieties, farmers in Nilphamari district said.

According to Department of Agricultural Extension (DAE), Nilphamari, this year the farmers of Domar, Dimla, Joldhaka, Kishorganj, Saidpur and sadar upazila of the district are cultivation advance potato on 4140 hectors of land. They expect yield the bumper production in this season due to suitable soil, favourable weather conditions and timely supply of necessary agriculture inputs.

During visits to different potato producing villages, including Panialpukur, Durakuti, Nitai and Kalikapur under Kishoriganj upazila of the district, the correspondent found some are making drains in between rows for irrigation at the potato field, some are hoeing the weeds while others are taking care of their newly produced potato fields. “This potatoes variety can be harvested in 60 days after sowing seeds and it is cultivation cost is low and high profitable from any others vegetables”, said potato grower Abdul Matin Miah of Panialpukur village under Kishoriganj upazila of the district”.

Another farmer, Fazlur Rahman, 52, son of late Jasho Mamud said, “This year I have cultivated of advance potato on 1 acre of land. I hope the production will bumper.

While contacted, Abu Bakar Siddque, Deputy Director (DD) of the Department of Agriculture Extension (DAE) in Nilphamari told the correspondent, “The farmers of Domar, Dimla, Joldhaka, Kishoriganj, Saidpur and Sadar upazila have been cultivated of early variety potatoes like granulla, Sagita-7, Cardinal, Red and others in this season”. 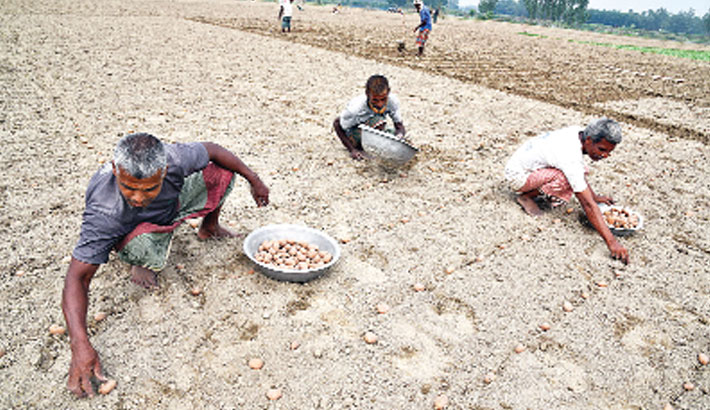 ‘Hand washing practice a must to prevent diseases’

A farmer is harvesting beans at his bean garden in Dumuria Upazila of Khulna. The photo was taken on Wednesday. Sun Photo