Trend of Industrial Disputes for Disposal

Industrial disputes are the necessary concomitants of industrialisation and common phenomena in industrial life. It arises out of difference among the ‘actors’ on several issues, the most conspicuous of which are ‘substantive matters. The presence of any dispute normally acts as an impediment to the development of sound and harmonious relations between labour and management, and also puts further off the possibility of a so-called permanent industrial peace in any society that allows labour exploitation. In advanced capitalist societies where labour exploitation is less marked, the low number of industrial disputes has helped in the steady growth of industrialisation. 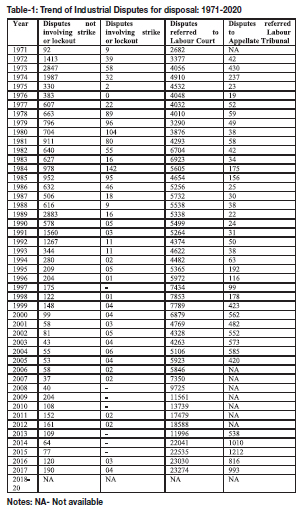 Any difference between workers and employers with regard to terms of employment may result in industrial disputes. Disputes over various economic and non-economic issues between employers and workers are the common features of industrial society. Disputes have both positive and negative effects on the industrial organisation. Disputes can be positive when it encourages innovation and creativity of individual, the clarification of points of view and the development of human capabilities to take decision in resolving conflict. On the other hand, it can be negative when it creates resistance to change, create turmoil situation in industry, foster distrust and misunderstanding between labour and management. If the disputes arise and are not settled properly, it will lead to go slow, disinterest, work tardiness, increased labour turnover, absenteeism and, in extreme cases, it might lead to strike, lockout, hartal, picketing and so on. So, it is a duty of the management to resolve the disputes when it arises in their industrial organisations before they escalate into a destructive activity.

The important feature of disputes is that no uniform and regular upward or downward trend is discernible. The industry-wise study of disputes shows that the majority of the disputes were in the formal organised sector like Jute Textile and Garments Industry.

The root cause of industrial disputes is the conflicting interests of employers and employees. Employers always try to maximise profits by giving the workers less than what they deserved. The workers create a surplus value that helps the formation of capital of the employing class. The workers, through their unions, demand wage enhancement and other benefits. This keeps the two parties always in a conflicting situation.

The assertion that the disputes had occurred due to political reasons is not true. Virtually most of the industrial disputes in Bangladesh occur due to economic causes, although many of them end up politically. Usually CBAs or worker’s representatives place their charter of demands and try to reach an agreement with the management as per laws. When the workers fail to press home their demands, they seek help from political parties in order to reinforce their bargaining power.

The dispute settlement system in Bangladesh is characterised by the ladder-step system, i.e. moving towards from step to the other in a specified sequence with apparently demonstrates that the government is committed to solving industrial disputes rapidly. But, in practice, the different measures of the government and improper execution of legal provisions considerably interrupt the effective use of dispute settlement methods. Sometimes industrial disputes are handled by employers with the support of other agencies of the state to lash and coerce the workers into compliance. As a result, an unhealthy situation prevails in the field of industrial relations in Bangladesh.

The present democratic government under the dynamic leadership of Prime Minister Sheikh Hasina is expected to come up with measures that might hopefully pave the way for proper execution of labour laws for better industrial relations in the country. However, the possibility of improved industrial relations in the country will remain a distant dream unless industrial disputes are settled through mutual trust, confidence and discussion between labours and management at workplace.

The writer is a Member, University Grants Commission of Bangladesh and Director, Board of Directors, Jibon Bima Corporation, Dhaka