A Heartbreaking Story of Afghanistan

Afghanistan is once again in the world news as the Taliban has taken over the country. The Taliban is a notorious extremist political group that has been known to conduct killings of innocent people, subjugate women, torture and imprison people unjustifiably, oppress religious minorities, and implement a highly repressive system of governance. In August 2021, after US forces had withdrawn from Afghanistan, the Taliban swiftly took over the country in a very short span of time. Cities and towns across Afghanistan fell to the Taliban as the militant group marched from one place to another, eventually capturing the capital city of Kabul. The utter failure of the Afghan security forces to defend its territory against Taliban fighters has shocked the world. This is a continuation of a brutal conflict that began 42 years ago and has since devastated the Afghan nation to an unimaginable extent. It is time to look back at the history and origins of this conflict to develop a more thorough understanding of the problems plaguing present-day Afghanistan.

For much of the 1970s, despite being a poor and isolated country, Afghanistan enjoyed relative peace. However, things would change dramatically for the nation in 1978 as a period of relentless conflict would follow from then onwards. The People’s Democratic Party of Afghanistan (PDPA), a communist political party, carried out a bloody coup d'état in 1978 and seized state power from the then President Mohammed Daoud Khan. Nur Mohammed Taraki became General Secretary of the PDPA and assumed state power. The PDPA subsequently undertook several social, symbolic, and land reforms that angered many Afghans. Political dissidents were brutally repressed. This led to nationwide unrest and, by 1979, a civil war had broken out in Afghanistan. Guerilla Mujahideen fighters, along with smaller Maoist militant groups,started engaging in an armed conflict against the state. This rapidly turned into a proxy war as the then Pakistani government provided the Mujahideen covert training centers and the US actively supported these rebels through Pakistan’s secret intelligence service known as, “Inter-Services Intelligence,” (ISI). On the other hand, the then Soviet Union sent thousands of military advisors to provide strategic assistance to the ruling PDPA. During this period, there was a high degree of tension between the dominant Khalq and the more moderate Parcham, two rival factions of the PDPA.PDPA General Secretary Taraki was assassinated in an internal coup engineered by a member of his own Khalq party, Hafizullah Amin. Amin became the party’s new General Secretary and the country’s situation worsened as thousands of people became victims of forceful disappearance.Displeased with the instability in Afghanistan, the Soviet Union invaded the country in December 1979 to crush the rebellion and establish their preferred system of governance. Amin was killed and subsequently replaced by the Soviet-backed Babrak Karmal. Under Karmal, an increasing number of Soviet military personnel were deployed in Afghanistan, leading to the beginning of the Afghan-Soviet War that would go on to last for nine years.

The Mujahideen was backed by the US, Pakistan, Saudi Arabia, China, and the UK as they fought a guerilla war against Soviet occupation forces in Afghan territory. Estimates say that around 500,000 to 2 million Afghan people died as a result of this military conflict. About 6 million Afghan people fled to neighboring Pakistan and Iran as refugees to escape the brutal violence. Approximately 15,000 Soviet troops lost their lives in the war effort.Thousands of fighters from the Muslim world, primarily Arabs, went to Afghanistan to fight against the Soviet Army, which they considered to be a religious struggle. The most prominent militant to have arrived in Afghanistan to aid the Mujahideen was Osama bin Laden, the mastermind of the 9/11 Terrorist Attack in 2001. The Afghan Mujahideen consisted of people from varying ethnic lines and ideologies, but they were united by their religious doctrine and stance against communism. During the war, 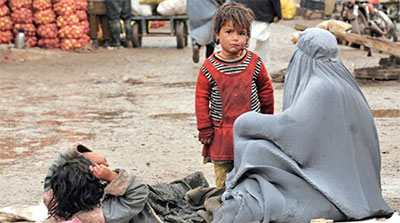 the Soviets controlled the main cities and the core lines of communication while the Mujahideen operated in the nearly 80 percent of the country’s territory that was outside government or Soviet control, which comprised the rugged, mountainous terrain of the countryside. The Soviet forces used their air power to destroy entire villages in order to deny the Mujahideen fighters safe havens, obliterated vital irrigation ditches, and planted millions of landmines.Ample funds, and weaponry poured in from the United States which was channeled to the Mujahideen through Pakistani intelligence services. The sheer brutality of the Soviet forces increased radicalization in Afghanistan as more and more of Afghan people were drawn to armed resistance, seeing no other way to free their homeland. In 1987, Karmal was replaced by the Soviet-backed Mohammad Najibullah as the nation’s president. The war was financially very costly for the Soviet Union as they were met with fierce resistance from Afghan fighters; Soviet soldiers also struggled in the cold and harsh Afghan terrain. Unable to cope with the heavy demands of war, the Soviet Union decided to withdraw its troops from Afghanistan in 1988. By February 1989, all Soviet soldiers had withdrawn from Afghan territory. Many experts are of the opinion that the Afghan-Soviet War was a major reason for the collapse of the Soviet Union.

The withdrawal of Soviet troops and the fall of the Soviet Union in 1991 led to the collapse of Najibullah’s government in 1992.Unable to leave Afghanistan, Najibullah took refuge in the United Nations compound in Kabul where he would remain for four years. Kabul largely escaped the violence and destruction of the Afghan-Soviet War, but the Mujahideen entered the capital in 1992 and fighting began between different factions of the militant group. By 1994, most of the city was destroyed due to the infighting. The Taliban, a militia of Afghans from southern and eastern Afghanistan who studiedat Pakistani madrassas, arose in September 1994 and took over the Afghan city of Kandahar that year. The Pakistani government firmly backed the Taliban in that period. The Taliban fighters kept advancing through Afghan territory and eventually grabbed control of Kabul in 1996, establishing a national government and effectively taking over the whole country. Najibullah was executed by the Taliban the same year. They established a vicious system of governance where Afghan citizens, especially women and religious minority groups, were cruelly oppressed. Only three nations recognised the Taliban-led government: Pakistan, Saudi Arabia, and the UAE. The Taliban reign saw brutal massacres of Afghan civilians, denial of UN food supplies to starving Afghan people, and pursued a policy of “scorched earth” - burning of vast areas of fertile land and destruction of tens and thousands of homes. Art, music, photography, media, and various other forms of entertainment were all prohibited under Taliban rule. Osama bin Laden returned to Afghanistan in 1996 after being expelled from Sudan. He eventually allied himself with the Taliban supreme leader, Mullah Mohammad Omar.The Taliban received military support from Pakistan while the Saudi Arabian government aided them financially. Ahmad Shah Massoud established the United Front (Northern Alliance) which fought against the Taliban from 1996 to 2001. The Northern Alliance consisted of Afghans from a variety of ethnicities such as Tajiks, Uzbeks, Hazaras, Turkmens, Pashtuns, and others who were dedicated to overthrow the Taliban.

In 2001, the Al-Qaeda, led by Osama bin Laden, orchestrated the infamous 9/11 terrorist attack in the US that killed nearly 3,000 people. The Taliban subsequently refused to hand over Osama bin Laden who was supposedly hiding in Afghanistan. Ahmad Shah Massoud was assassinated by Al-Qaeda operatives two days before the 9/11 attacks. The US then invaded Afghanistan in October 2001. The Bush administration stated that the goal of this military operation was to fight global terror by destroying the terrorist stronghold in Afghanistan. However, the real motive behind the invasion may have been to seek revenge for the 9/11 terrorist attack and gain control of Afghanistan’s mineral resources. In November 2001, the US-backed Northern Alliance entered Kabul and shortly afterwards, the Taliban was driven out southwards, leading to the collapse of their regime. Karzai, an American ally, was subsequently named interim president while some warlords and members of the Northern Alliance became provincial governors, military commanders, and cabinet ministers in the new regime. NATO allies joined American forces in 2004, but the Taliban still managed to carry out deadly attacks. In 2009, the then US president Barack Obama increased the number of American troops in Afghanistan which forced the Taliban to retreat farther, but they could not be held back for a long period. NATO forces concluded their combat mission in Afghanistan in 2014, leaving the country’s security in the hands of Afghan security forces.This allowed the Taliban to make further territorial gains as they advanced forward. The US government and the Taliban started peace negotiations without any involvement from the Afghan government and it was decided in Qatar in 2020 that the US would soon fully withdraw from Afghan territory. This agreement did not bring an end to killings as the Taliban attacked Afghan security forces and civilians, and carried out targeted assassinations. Last month, US forces withdrew completely from Afghanistan, allowing the Taliban to virtually take over the whole nation. Afghanistan’s former president Ashraf fled the country as the Taliban grabbed power. An estimated 69,000 Afghan security forces and 51,000 civilians and militants have died as a result of the twenty-year conflict. The US spent more than $2 trillion to finance the war-effort.

The modern history of Afghanistan is a tale of death, destruction, and devastation. Due to the national and political interests of several foreign nations, Afghanistan has had to endure four decades of unimaginable hardship and sorrow. The nation remains one of the poorest countries in the world, and is once again under the tyrannical rule of a ruthless extremist group.Years of unending conflict has left the country with miserable living conditions,inadequate public services, poor levels of education, low quality healthcare, poor nutrition, and so on. Twenty years of war by the US and its allies could not defeat the Taliban, who remain as resilient as ever. In the months to come, the world will find out what kind of rule the Taliban establishes and implements over the Afghan people. At such a time, one needs to empathize with the Afghans as they face a bleak future.

The writer is a Development professional.

He can be contacted at [email protected]