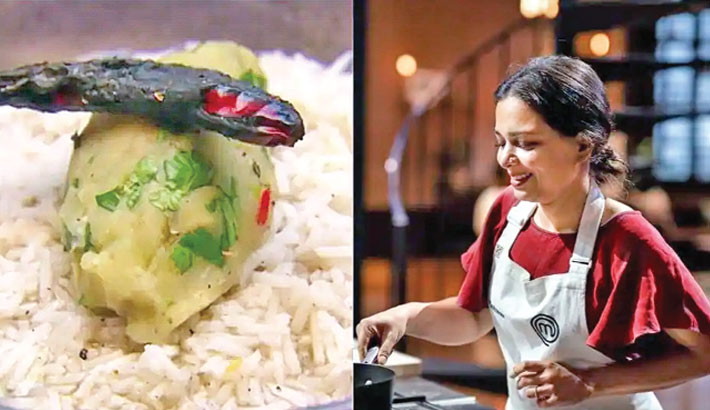 Verily recalling a viral video of Imran Khan's Barwari debate, an erstwhile student and debater of Dhaka College, telecasted on BTV in the '90s in which he profoundly showed immense yearning to present and commence our 'Dal Bhat', a Bengali pop culture, in the western world. Many decades have gone and he has already become a distinguished tech entrepreneur in the US but still, the ambition that he sought and dreamt of is not accomplished. Most of the time debaters and speakers express and argue only for winning in the competition, not for the real outcome. However, this was only a college-level debate.

It is very audacious to present a particular pop culture in such a big stage of competition like MasterChef Australia where the fear of losing roams all around but when someone is confident like Kishwar Chowdhury, it becomes completely feasible to deal with. MasterChef Australia is one of the biggest competitions on cooking food for amateur participants. Kishwar Chowdhury presented many dishes but her grand finale dish of 'Panta Bhat and Alu Bhorta' is stunning to date for all the Bengalis, whose millions of hearts had already been melted. Can a farmer of a remote village of Bangladesh think that a dish eaten by his family every morning round the year is boastfully taking part in a world food competition? This is hilarious and marvelous what Kishwar has done for Bangladesh and its pop culture.

Kishwar Chowdhury was born in Australia and grew up there. Her father is from Bangladesh and mother is from Kolkata who immigrated to Australia nearly 50 years ago. Growing up in a cultural family and being of Bangladeshi descent made Kishwar so traditional at family-related foods and cultures. Taking her background aside, however, she did a splendid job in MasterChef Australia. No one could be more competent at holding on to the role than she did in the grand finale of MasterChef Australia. As usual, competitors are prone to think of winning a race to gain a hall of fame but she was so different and resolute at every step she took in the competition.

The way Kishwar Chowdhury unfurled Bangladeshi pop culture to the world is 'incredible' in one word and fully different from many perspectives though the Bangladeshi immigrants have been striving for a long time to build up persuasive stances overseas for disseminating underrated pop culture. Propounding 'Panta Bhat and Alu Bhorta' dishes in the Grand finale of MasterChef Australia is valorous. She didn't care about whether she wins or loses in the competition, putting forward lovely dishes of our culture, so, what can stop her from winning millions of hearts? This robustness made us grateful to her unconditionally.

Talking about the phase of globalisation, we discover ourselves in a very heterogeneous culture. Particularly the developed world has been facing this for a long time. The southern people became competent to make the northern know that 'we also have powerful and diverse cultures'. This is very tough and challenging to keep up individualism in the developed world as we are eastern and southern. The people who are from these regions have been suffering from the distinction and dichotomy of North-South and East-West divisions.

Globalisation is a vast entity and it has a significant influence on mass communication. It has paved the way for modern interaction. Globalisation is a cross-national and cross-cultural idea, it is the process by which people and goods move easily across borders. Globalisation has enabled Kishwar to live in Australia despite her Bangladeshi heritage, and Bangladeshi audiences have enjoyed her culinary prowess as a result of the free movement of cultural elements. Both events are increasingly interesting examples of the effects of globalisation. This is the dichotomy of globalisation. From this standpoint, Kishwar Chowdhury was strenuous to uphold her own culture on the world stage with enthusiasm that roused our latent volitions to present our country with love, respect and passion.

Originally broadcast on television in 2009, the MasterChef Australia television series has now completed its thirteenth season, which aired in 2021. Because of Kishwar, it soared to unprecedented levels of popularity in 2021. This time a large number of people who have enjoyed Kishwar's cooking has made it more popular than ever around the world. Kishwar's cooking video became viral on social media sites, garnering millions of views. Her traditional food, which is inspired by her ancestors' recipes, has made her a household name. A lot of people saw it as their representation. People became nostalgic and emotional as a response to Kishwar's cooking ability.

Kishwar represented Bangladesh and Bangladeshi cuisine in front of the world; it touched the mass people because they have never experienced such an incident before. Bangladeshi people around the world have never been vocal about Bangladeshi food culture; it was always under the shadow of Indian cuisine. Kishwar took this opportunity in MasterChef Australia this year.

In today's society, when everything seems to have lost its purpose, it is more important than ever to recognise the significance of family. The essence of family and what it represents has not changed, even as the world has become more contemporary and advanced in recent years. A variety of things contribute to the strength of a family; food is one of them. Eating is a very emotional experience. Food is used to commemorate important occasions as well as to provide solace through times of sadness and loss. It is common for us to identify specific foods with specific holidays, and the aroma of foods that we are familiar with from our childhood can elicit special memories or sensations. This was widely seen in the reactions to Kishwar’s cooking videos.

During the epidemic, we got a terrible taste of what life is like in the real world. The ability to spend time with family, friends, and be together was severely restricted. During this difficult time, a mesmerising show such as MasterChef Australia and Kishwar helped to alleviate our boredom and sufferings of everyday life. Her courage and success delighted every Bangladeshi.

The writers are students