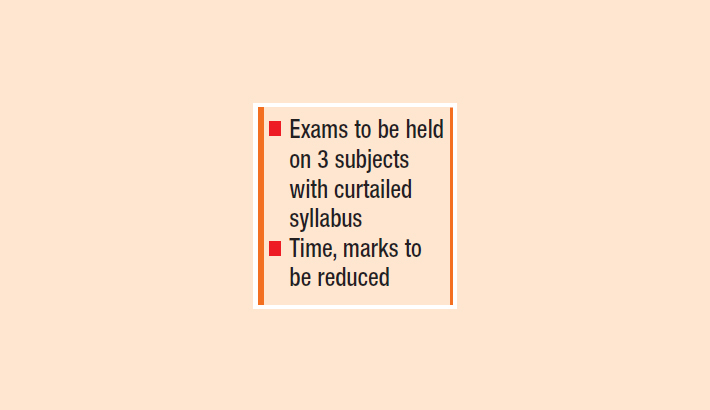 The SSC, HSC examinations will be taken on shortened syllabuses of three group-based elective subjects while the assessment will be done based on assignments for the rest of the subjects.

However, if the pandemic situation does not improve by then, the education ministry will go for results of subject mapping of previous public exams or the scores of assignments or combining both.

Education Minister Dr Dipu Moni came up with the government’s plans for the pending two public examinations at a virtual press conference on Wednesday amid mounting concerns of students and guardians.

Mentioning the reasons behind the plan to hold the both tests in November and December, Education Minister said, “Our infection rate was much lower in the two months of last year and January in this year. Based on that, we hope the number of cases will fall again around that time this year too.”

Apart from this, the government is carrying out massive vaccination campaign as a large numbers of people will come under the vaccination within the next several months, she said.

Dipu Moni said a total of 24 assignments will be given to SSC and its equivalents candidates in 12 weeks from July 18. The candidates will have to complete eight assignments on each of the selective subject.

Meanwhile, a total of 30 assignments will be given to HSC and its equivalents candidates in 15 weeks from July 26. The candidates will get two assignments in each week.

Dipu Moni said the assignments will be taken by the students in preparation for the exams and the compulsory subjects will be assessed through subject mapping.

The time of the exams will be one and a half hours instead of three hours for this year and the marks will be 50 instead of 100 in each subject.

She also said arrangements will be made to evaluate the accuracy of the assignments. That is why they will be re-evaluated by bringing copies of assessments of various educational institutions across the country through random selection system.

The minister also said the form fill-up for the SSC and HSC exams would start after Eid-ul-Azha and the process will be completed through online.

The SSC exam was scheduled to be started in February while the HSC exam in April but holding the both exams was not possible due to the pandemic.

Earlier on June 29, the government extended the closure of all educational institutions to July 30 due to the worsening Covid-19 situation across the country.

The educational institutions have been closed since March 17 last year due to the Covid-19 pandemic.

The government had planned to reopen schools several times this year but had been forced to extend the closure as the situation deteriorated in the recent time.

HSC students were assessed based on their JSC and SSC results. All students from primary to secondary levels were also promoted automatically due to the pandemic.

There are about 4.5 crore students from pre-primary to higher education level at around two lakh educational institutions across the country.